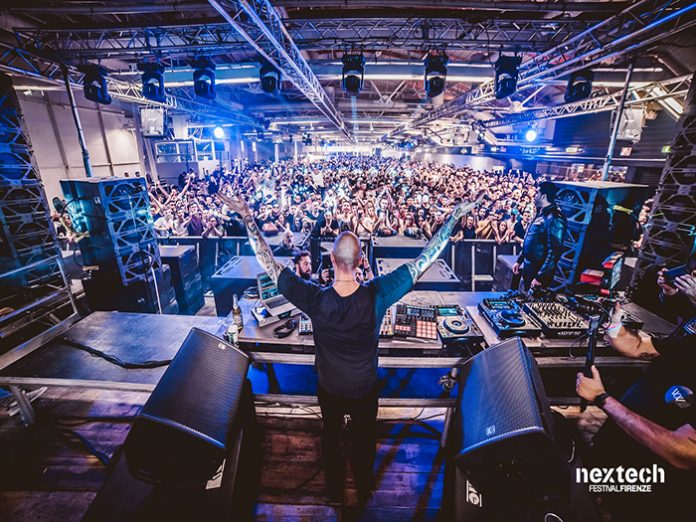 Florence’s Nextech festival chalked up a sold-out 12th edition in December 2017 at the city’s Fortezza da Basso, with 3,000 fans flocking to see and hear Chris Liebing, ably preceded by up and coming local DJ Marco Effe.

Frankfurt-based but constantly globetrotting on the international club and festival circuit, Liebing is a Techno pioneer, DJ, producer, podcast and radio host, as well as being the driving force behind his CLR label. One of the first DJs to use the new possibilities offered by the digitalization of music in an original creative manner, Liebing is constantly on the search for new methods of creative expression. These include real-time manipulation of individual tracks and sounds in his DJ sets, so the sonic quality of the sound systems he uses plays a fundamental role in the success of his performances.

A veteran of the Florence music scene, Fernando Fanutti had the idea for the Nextech project, a festival that has brought top international EDM artists to the Tuscan ‘capital’ for ten years, with its combination of digital AV art, music and design. When he moved from Rome to Florence in the 1970s, Fanutti continued his work, programming the bands in the some of the city’s venues and as a music journalist and critic, with a particular focus on electronic music. Since the first (2006) edition, with Ellen Allien and Apparat, Fanutti’s expert ears have heard countless artistes and the sound systems used.

Regarding the Outline GTO, he said: “Since my aim has always been to achieve quality sound even in difficult situations, I must say that I noticed the difference between the Outline PA and those used previously right from the first time it was fielded.​ ​Very briefly, although ensuring coverage at a greater distance from the stage, the sound maintained its clarity and was less tiring on the ears. Through the years, I followed the Outline systems’ evolution and my initial impressions were confirmed and improved. Then, in December 2016, we carried out a real ‘listening test’ also on the monitors with Chris Liebing, who had requested another brand.​ ​The Outline Vegas 15CX systems’ sound had more dynamics, better definition and at the same time was smoother, so was more effective and less tiring, to the point that Chris was convinced and agreed to use the monitors too.”

Tuscan audio contractor Emporio On Stage was the country’s first rental firm to purchase Outline’s GTO system and owner Angelo Catoni explained the set-up used at the event: “The main rig comprised 2 stacked arrays of 6 Outline GTO on either side of the stage, plus 2 more arrays, each with 3 GTO per side, used for in-fill chores. A beefy bottom end was ensured by 16 Outline DBS 18-2 sub-bass units and 4+4 Outline LAB 21 HS infra-subs at the stage.”