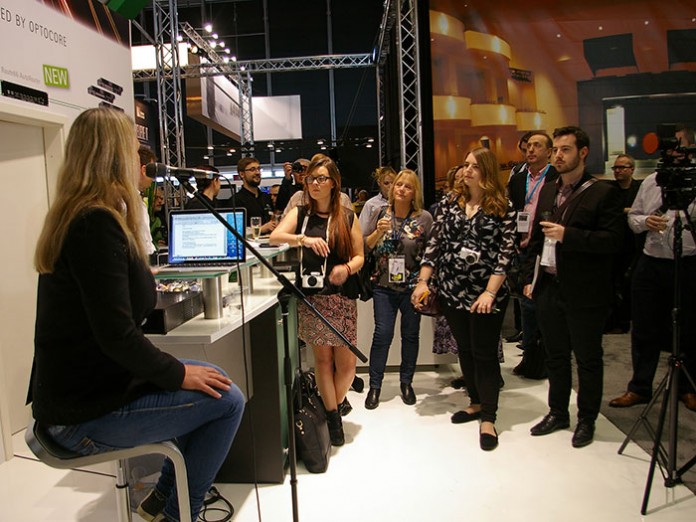 Optocore and BroaMan had plenty of surprises in store for the world’s press (and partners) when they assembled at the company’s booth during Prolight+Sound in Frankfurt.

Unmissable for its slot car scale racetrack, the booth featured milestones from the company’s 20-year history right up to the present, including this year’s new blockbuster releases.

First up was BroaMan’s upgraded Route66 video router, now offering Auto Routing and an intelligent fibre patch bay. The new functionality is powered by Optocore, and is ideal not only for Installation but equally for Live Events or Broadcast.

The first customer is Wigwam Acoustics — and their long-term digital specialist Alex Hadjigeorgiou, the man responsible for the acquisition, flew in from South America to address the assembled press. Now an independent designer, he announced that Coldplay would be the first user of the system when the European leg kicks off in Nice on May 24.

Speaking of his historic close relationship with Optocore’s Marc Brunke and Tine Helmle, he said: “The Route66 Auto Router will enable us to create a fibre distribution network, which will be able to expand or contract depending on the context in which it is being deployed. It will also allow the network to be built and tested in sections – or loops – allowing us more flexibility when installing it. This addition to our Optocore system was a natural progression, which allows us to improve on our existing methodology and move the whole system design forward.”

First Uli Haug, and then Oliver Mack explained the advantages of being able to network their beam-steering solution via Optocore optical fibre, using a ring-shaped cable configuration to connect all the devices on an Optocore network, thereby improving reliability and reducing costs.

A SANE FX module, mounted inside the housing, enables direct fibre connection to the speaker which is often used in combination with the security and evacuation system in large public spaces and entertainment buildings. As the Optocore fibre network is a modern IT-based ‘copper free’ audio infrastructure, it fulfils all demands in this area, thus greatly simplifying installation in respect of security, weight and flame-retardant design.

Summarised BroaMan MD, Tine Helmle: “Once again we showed we can provide unique solutions for all our core sectors, Broadcast, System Integration and Concert, touring at the top level. The entire show was a major success for both brands.”