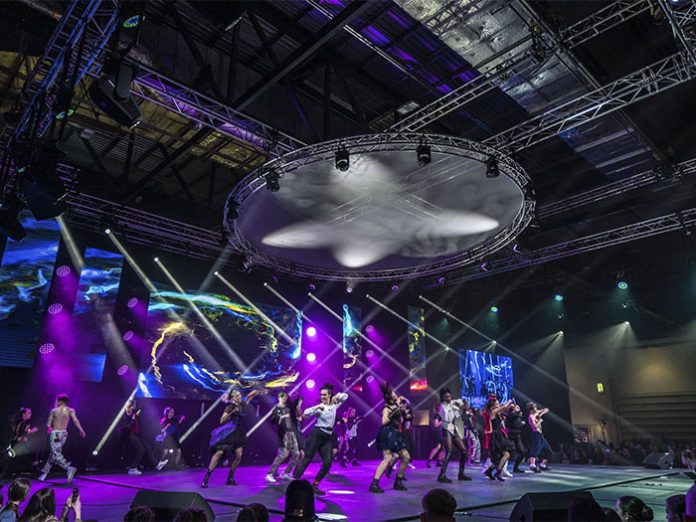 Earlier this year, ExCeL London hosted Move It, one of the largest dance event in the world. Move It featured performances by 150 acts, ranging from professional troupes and college dance groups, to community organisations and local schools. Supporting them on stage was a highly flexible production design by Steve Yeardsley and the OneBigStar team that featured over 170 CHAUVET Professional fixtures from the company’s own inventory.

Engaging the services of David Howard Lighting Design, the OneBigStar team endeavoured to create stage lighting that was versatile enough to reflect the event’s diverse range of dance genres, a collection that included everything from ballet and ballroom to freestyle and hip-hop.

“Move It presents fun challenges for me as a lighting designer,” said Howard. “One of the most formidable is dealing with the sheer volume and diversity of performances on the main stage, given the  limited amount of time between the acts.”

OneBigStar helped Howard meet this challenge by providing an extensive and adaptive main stage lighting rig that featured 20 Maverick MK3 Wash, 14 Maverick MK3 Profile and 16 Rogue R1 Outcast BeamWash fixtures. These fixtures were located in a variety of positions. Many were flown on a circular truss over centre stage, some were on  four parallel rows of truss running, two per side, over stage left and right, while others were on vertical columns between video panels, and the remainder arranged across the upstage deck.

Having so many lighting positions allowed the design team to change the aura of the stage dramatically to reflect an array of moods for different performances. At times they went with all out colour and brightness, while for other numbers they opted for dark industrial looks or abstract geometrics.

To ensure that the looks stayed fresh and original between the different dance parties and headlining acts, such as Dark Angels, Dane Bates, Flawless and Joshua Base Pilmore, performers were invited to provide descriptions of their pieces in advance. This made it easier for the design team  to determine which colours and effects could be best suited to accentuate their performances. The scenes were then cued using ChamSys MQ80 consoles for optimum ease and efficiency.

Utilising 140 PVPS7 LED video panels positioned at the back of the stage, the team were able to complement the lighting with aesthetic video images, customised for individual acts. The addition of nine ÉPIX Strip Tour linear fixtures enabled them to create added geometric images on stage for some acts.

In addition to working on the main stage, the design team created an engaging visual environment throughout Move It, meeting various challenges along the way. At the Showcase Stage, for instance, they had to contend with limited height for hang points, as well as with ambient light seeping in from the convention floor.

“All stages have different challenges at this event, these included a 9m ceiling, and 270-degree audience access, as well as particular requirements from dance acts,” said Yeardsley.  “Having worked the show for a number of years, we know what does and doesn’t work well. We worked with David Howard and Henry Florence on the Showcase Stage to come up with designs to suit all styles of dance and West End style performances. Clever use of video and lighting together made every piece stand out and look different to the last.”

Contributing to the design on the Showcase Stage were 12 Maverick MK2 Spot and four STRIKE 4 fixtures. An additional six MK2 Spots were used to create upbeat looks in the VIP area.

At the event’s Roller Rink, a collection of 20 COLORdash Par Hex-7 and two Ovation E-910FC fixtures provided visual energy with theatrical inspired looks and specials. Additionally the par units gave Howard the opportunity to mix lighting effects on the fly, drawing upon myriad colour combinations to react to the different performances with saturated colours and immersive wash effects.

Throughout the event, it was not only the dramatic colour changes and sweeping movement of lights and video images that contributed to creating a special atmosphere. It was also the inspired geometric configuration of fixtures. This was evident right at the start of Move It, when the dance group Flash Mob performed at the tunnel entrance against the backdrop of 56 ÉPIX Strip IP linear fixtures arranged in a chevron formation to create the effect of motion.

As thousands gathered at the entrance waiting for the official opening, intense music came on and Flash Mob appeared as the lighting and smoke  effects transformed the entire area for their performance.