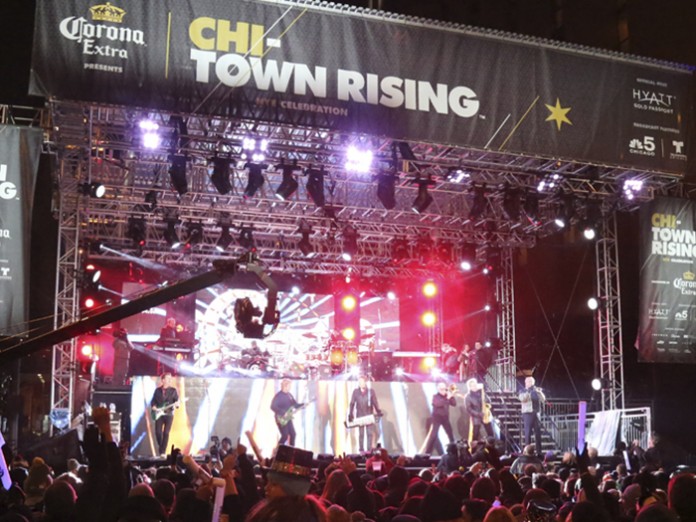 An hour after the famous New Year’s Eve ball dropped in Times Square, a gleaming multi-coloured celestial structure located almost 800 miles away welcomed 2016 by moving in the opposite direction.

Chi-Town Rising, Chicago’s first countdown NYE celebration, featured a 70ft star that rose on a downtown high rise until it reached 360ft at the stroke of midnight. It was accompanied on its upward journey by the sound of the multi-Grammy winning band Chicago, fireworks and a lightshow that featured a variety of high output fixtures.

Among these fixtures was a collection of Nexus 4×4 COB LED panels from Chauvet Professional. Christopher Wren, Partner/Production Designer at ONE618, used the Nexus fixtures to engage the 20,000 people who crowded into Chicago’s Riverwalk to participate in the celebration as well as those in the 595,000 households that tuned in to watch on television.

Speaking of the celebration, which was the number one rated New Year’s Eve broadcast in Chicago, Wren said: “We were very aware of lighting this for TV viewers as well as the live audience. Our goal was to strike a balance and create looks that worked for both groups.”

The Nexus 4×4 panels that Wren positioned on downstage truss were critically important to helping him and his team (a group that included Programmers Tyler Roach, Chad Lussier and Chris Lose) achieve this goal.

“We arranged the Nexus panels on the downstage truss of our rig so they could be seen prominently on TV shots,” he explained.  “The fixtures worked very effectively as camera candy.”

When they weren’t being used to frame shots and provide signature looks for broadcast coverage, the Nexus panels, which were run at 208v, served as high output audience blinders. With a brightness of 484 lux at five metres from 27-watt RGB COB LEDs, the Nexus panels were easily bright enough to command the audience’s attention even with the other high output atmospheric, beam and aerial effects on the Chi-Town Rising rig going at full blast.

The colour rendering quality of the Nexus panels also came into play in the ONE618 team’s design. Using the panels for effects lighting, Wren coordinated them with the evening’s theme colours of gold, silver and white. He departed from these colours for the performances by the evening’s musical artists, a lineup that in addition to Chicago included a variety of local acts representing a range of genres as well as Billboard’s Top New Artist for 2014, American Authors, whose hit Best Day of My Life reached Number One on the charts.

“Being television friendly was very important,” said Wren who controlled the rig with an MA Lighting grandMA2 full-size console.  “However, our designs also focussed on this being a live event for the people on the Riverwalk as well as a live broadcast or those watching on television. The Nexus helped us in both respects.”

For the ONE618 team, the opportunity to light Chicago’s first New Year’s Eve countdown began when John Murray of Arena Partners (owners and organisers of the event), contacted the design firm.

“John Murray approached us because of his work with Carrie Kennedy (a partner in ONE618) on the 2016 Chicago Olympic bid,” said Wren. “I have a background in both design and technical direction – and this project required a strong ‘technical’ design because of the inherent challenges.

“John Marovich, a partner at ONE618, has a strong background in terms of integration of technologies, which made him the ideal person to lead the design of the star.”

Among the challenges faced by the ONE618 team was designing for an outdoor festival in Chicago in the winter. “The weather was definitely a factor,” said Wren. “Plus since this was the festival’s first year, we had only a limited time-frame to implement this project.

“We had an initial meeting together at the event site over the summer. This entire event was executed in less than four months from design to implementation. So, we chose fixtures that we knew were up for the challenge.”