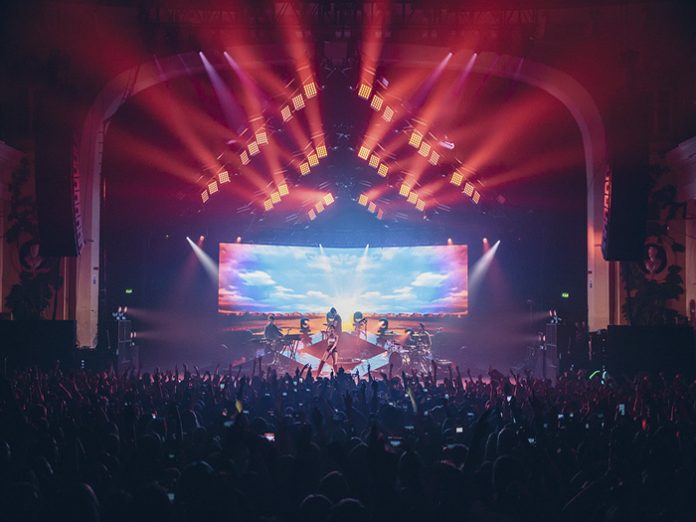 American singer and songwriter, Halsey, commenced the European section of her world tour earlier this year with the aid of Ayrton who created an adaptable lighting design for her headline Brixton show.

Halsey’s production company, Okulus, chose the flexible yet angular appearance of the Ayrton MagicBlade-R and MagicPanel-R fixtures because it could meet the artists demand of a set based on ‘V’ shapes and be adapted to accommodate the varying size of venues on tour.

Okulus produced a V-shaped stage, three V-shaped upstage ramps, a V-shaped video screen backdrop, all topped off by an inverted V-shaped lighting truss arrangement which was angled forward at 45°.

Okulus Creative Directors, Louis Oliver and James Scott, add: “The lighting trusses were formed of three pairs of angled arms that swept upstage, on which were rigged 36 MagicPanel-R units, grouped into multiple banks of three. The truss arms were also outrigged with 30 MagicBlade-R fixtures, which were evenly distributed along their length to outline the ‘V’ structure.”

“MagicPanels and the MagicBlades were used together to block light sources and for pixel effects purposes,” Scott explains. “The MagicBlade-R units were used to accentuate the shape of the V trusses with their unique configuration of in-line LEDs, and to create mid-air patterns using individual emitters.”

“We used the MagicBlade-Rs 360° infinite pan feature on Hurricane where we programmed a slow infinite pan with a slow dimmer effect to create an almost tornado-like swirling effect.”

“However, the MagicPanels were used in a rather different manner, effectively treating them as textural washlights with the capability of producing a lot of interesting patterns. We ran simple dimmer chases across the face of the panels during some numbers, or programming them as two groups with the inner and outer cells used to create different shapes, treating them as two different fixtures. We also pixel mapped the panels direct from the console, making use of MagicPanel’s five by five grid configuration to create patterns.”

Okulus prefer not to fall back on built in effects, rather using Ayrton fixtures in their most extended mode. “This gives us complete control over the fixtures, allowing us to develop our ideas with great precision”, added Oliver.

Halsey is a big fan of seeing her audience on stage, so rather than maintaining the traditional molefay route of blinding the audience, Scott and Oliver used MagicPanel-R fixtures to bleed light onto the front few rows.

The show was also time coded and programmed on an MA Lighting grandMA2 format, operated by Mike Sheck who has been consistently impressed with Aryton’s lighting performance.

“The MagicBlade-R and MagicPanel-R introduce design possibilities are unparalleled with anything else on the market,” said Sheck. “Having the ability to use bitmaps and independent pixel control of each fixture can bring a new level to your production, combined with the infinite pan and tilt abilities.”

Following the success of Halsey’s Brixton show, where Ayrton’s fixtures were first showcased, Okulus knew they could scale the MagicBlade-R and MagicPanel-R down for the rest of the tour for smaller venues.

“The choice [of Ayrton] proved a great one and we were able to reposition the MagicBlades to line the top of the LED wall that replaced the V-shaped truss on the rest of the tour,” concluded Scott and Oliver.