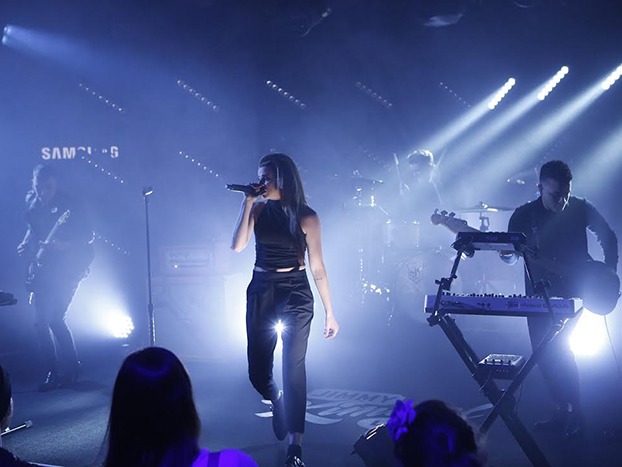 UK-based production design company, Okulus, chose a bank of 40 Ayrton MagicBlade-R fixtures to back the up-and-coming US rock band, PVRIS, on their first-ever televised appearance. The band appeared in January on the Jimmy Kimmel Live! show, where they were watched by over 2 million viewers.

PVRIS turned to Okulus’ lighting designers and programmers, James Scott and Louis Oliver, to bring their ideas to life.

Scott and Oliver decided the unique appearance and reliability of Ayrton’s MagicBlade-R fixtures were a sure-fire way to achieve this and used them as a dynamic backdrop to the band’s equally dynamic performance.

“We wanted to give the band a look that would have an impact on this, their first televised appearance, and that in front of an audience of 1-2 million viewers on this prime time American TV show,” says Oliver. “Knowing the size of the audience, and the social media and online coverage that would follow, we wanted to be sure to present the band in a strong, signature way, and provide them with a solid piece of footage that emphasised the look and brand of the band.”

Scott and Oliver used the MagicBlade-R units to create a matrix of light around the band, and programmed them to create some strong looks and dramatic sweeps that looked great on camera.

The MagicBlade-R units were rigged vertically on 10 eight ft poles behind the band in a 4-high by 10-wide configuration to fit within the restricted space of the Kimmel studios. “The ‘Lobby’ performance area has a low trim and an angled upstage wall which meant we had to keep things simple,” said Scott. “We needed a fixture that was compact and full of features. We aren’t using any colour in the campaign, so we are really only playing with intensity and movement. The MagicBlade-R was perfect as it’s one fixture with many light sources.”

“The band themselves have a strong black and white look which we were keen to emphasise,” continued Oliver. “Under their direction we kept the colour palette deliberately monotone and chose to use the MagicBlades only in white, with one minor exception of a pale blue, CTB tint. We were able to create lots of subtle effects amid the sweeps, altering the angle of the fixtures to create symmetrical patterns across the back wall and taking full advantage of the control over individual emitters to run vertical and horizontal chases over the grid.”

Scott and Oliver programmed the show in advance using cast WYSIWYG software. “This gave us the chance to experiment with the MagicBlade and get the most out of it, and to play with the structure of the visuals they produced in the grid.”

Oliver and Scott chose to programme each MagicBlade-R manually without using any of the onboard features. “We wanted to make a truly bespoke look for the band and take advantage of the versatility of the units to achieve this. We knew what we wanted to achieve and the fixtures are easy to programme, so the whole operation went very smoothly.”

The programming took place at the offices of Ayrton’s exclusive UK distributor, Ambersphere, in London. “The team at Ambersphere were helpful as always, supplying us with space, and a console to work on,” says Oliver. The show was then set up and operated by Sooner Routhier during the broadcast, triggered by timecode and driven from a MA Lighting grandMA2 Light console.

“The MagicBlades were great and we will continue to use them on PVRIS dates this year,” concluded Oliver. “Now we can’t wait to get our hands on Ayrton’s new DreamPanel-Twin to see what we can do with that!”