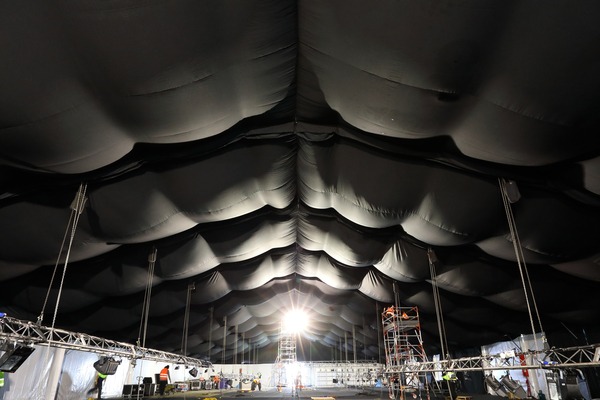 Earlier this summer, Oceania, New Zealand’s largest lighting rental company, invested in 24 German Light Products X4 L LED heads, which went out the same day they arrived to support the British & Irish Lions’ rugby tour down under. Over 6 weeks they were ever present on all regional games and the 3 All Blacks tests.

At Auckland’s Eden Park, also New Zealand’s national sports stadium, the company supplied all technical rigging, lighting, vision and sound equipment, technical management and crew, both in the venue spaces and the large fine dining 1,200 and 2,000-capacity party marquees on the practice ground, measured a colossal 400sqm and 350sqm respectively, requiring a lot of truss and expertise.

“The GLP X4 L and X4 Bars really impressed us both,” confirmed Oceania general manager, Simon Garrett. “The X4 L offers both workhorse and bling modes. A fast, very compact wash light with a source range from low to very high 10,000K colour temperature, giving some beautiful cold variation in straw, steels, lavenders etc. as well as some bling, with a myriad of looks. I particularly liked the straight lines and V shapes of the pixels, and the randomised strobes using macro mode.”

Garrett added his company had needed some mid-sized LED wash for some time as their previous fixtures “ran out of puff at around 8 metres”. But none of the other options were inspiring him until he and designer Jeremy Fern ran into the GLP impression X4 L at last November’s LDI Show in the United States.

The 24m DHL Dome was animated using 12 GLP fixtures. “This look had 6 ‘dots’, which gave the beams a pretty hard edge, and a further 6 in Wash mode as a backing colour,” continued Garrett. “As the DHL Dome was pretty opaque it would have required between 24-36 compact LED washes to have animated this as successfully.”

Although it’s still early days he says they are delighted with their choice so far. “The 12 onstage provided a really big look, taking a six-channel distro feed. With their small footprint, they were delivered quickly to site in three cases, rigged easily and took up very little ‘musician and backline’ space.”

Garrett concluded: “It’s hard being the first adopter in any territory, and even harder on new product as it’s not yet on specs or available as a sub-hire resource. But to date we are extremely pleased with the investment.”