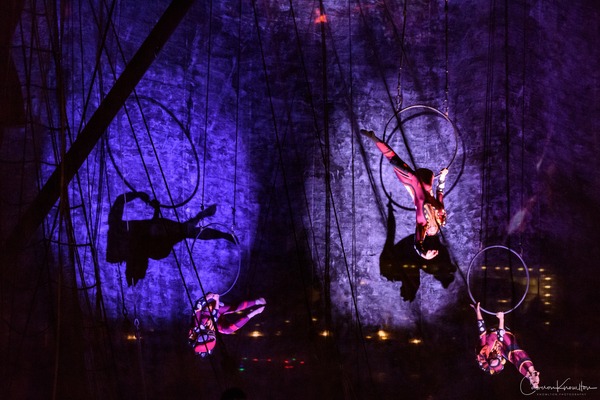 “We stage one massive show a year: It’s extreme theatre with multimedia content,” said Director Paul Kirby. “Productions feature lots of moving lights, LED and incandescent lights and lots of video, in our current production there’s not a moment without video projection.”

Kirby added: “We thought the dot2 would be the best choice for us. We got in touch with ACT Lighting Canada, which kindly became a featured sponsor of Caravan. With our old board, we crossed our fingers hoping the movers would come up. But the moment we started rehearsals with dot2 things changed. It’s like driving a 2018 Rolls Royce compared to a 1950 Morris Minor, what a smooth ride.”

Lighting Operator Oona Kilcommons quickly was taught the operation of the MA Lighting dot2 core while working with Programmer and Lighting Designer Michael Franzmann. “It has been a breeze to learn. The board is intelligent and accessible, and it is able to handle and organise a heavy amount of information in a way that doesn’t overwhelm the user. The touch screens are an absolute dream, even without an additional monitor, I am able to track cues, live-adjust fixtures, call up groups and jump to presets without more fuss than a poke or two.

“Because some of the cues have to be flexible, and may change night to night. For example, we have a performer moving around the audience, having a variety of executors is quite valuable. I have the ability to shift out from cue scenes into positions I’ve stored for those just-in-case moments when our actor isn’t where she was last night. As well, I have the ability to gracefully slow or speed up the timing and transition of cues if need be, even reversing the cues can occur with some grace. That in and of itself is a blessing! Especially for an operator learning a different board for the first time,” Kilcommons explained.

Kirby concluded: “The system is not only a thoroughbred but a Clydesdale. After opening Nomadic Tempest we added features to the show, including some quite interesting black light effects. And dot2 just adapted to them beautifully. Our shows are already extremely complex, but we know that if we add even more in the future dot2 can handle it.”