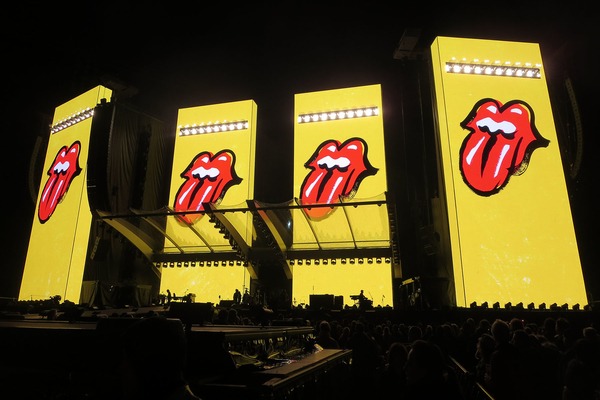 The company worked with its regular suppliers from their Heist-op-den-Berg, Belgium HQ, with 4 elegantly curved 12 metre long steel roof beams breaking down into 2 sections, fully clad with sleek aluminium panels, and each 12 metre section contains 9 integral Martin MAC Viper moving lights, central to Patrick Woodroffe’s lighting design. The lights travel in purpose-built beams designed by WI, complete with underside cladding, and each is pulled into place using 4 250kg hoists rigged inside the roof and out of sight once the operation is complete, with the fixtures’ bodies neatly protruding from the roof beam.

WI devised a method for rigging and securing 4 impressive 20 metres high by 9 metre wide LED video screens to the front of 4 large onstage towers. A custom top truss was designed and built by WI for each tower, with the screens hung from truss brackets that retract for transportation. 2 metres below the top of the LED screens is an 8 metre wide gap to accommodate a row of nine Robe BMFL Spot moving lights, each accompanied by 4 single cell blinders, protected from the elements by a transparent rain hat. The 4 video screens are pulled up the tower via two 2.5 tonne Liftket motion control hoists, double reeved for a 5 tonne capacity, 2 per tower with 8 in total, connected to the black steel base of the towers, sitting on the upstage edge.

Koen Peeters has worked on previous Rolling Stones Tours in 1998, 2002 and 2005, commented: “It’s great to be back working with the band and an amazing creative and technical team. We have really enjoyed the challenges and the collaboration, and I think the end results are something of which we can all be proud”.

Sam Pattinson of Treatment Studios produced the video content, Montreal-based Solotech supplied the IMAG mix, which was cut by Camera Director Nick Keiser and Neg Earth from London delivered the lighting and rigging equipment. Jeremy Lloyd from Wonderworks undertook technical co-ordination during the development and pre-production period, while Opie oversee production on the road.

The No Filter tour plays 9 European countries, ending on October 25 2017 in Paris.