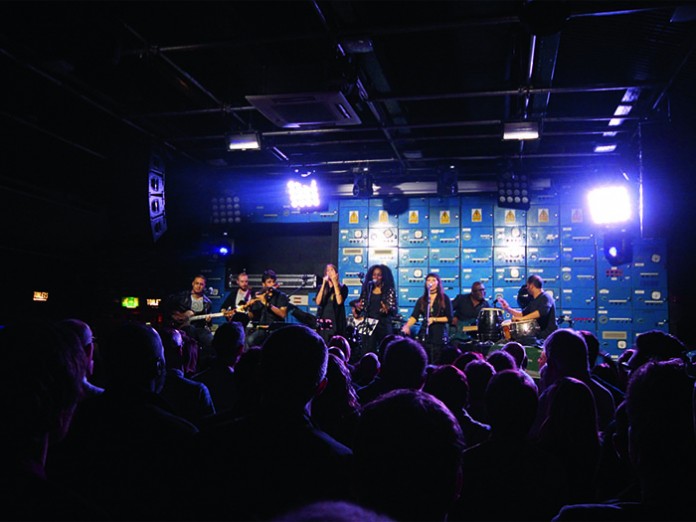 Renowned producer and composer, Nitin Sawhney, used KLANG:technologies’ 3D IEM system on his most recent tour. The product aims to give the artist a more organic onstage sound as well as allowing full control of their mix. TPi’s Stew Hume went along to the last date of the tour to get the opinions of the crew and musicians.

For some artists, there is a hesitation to make the leap from wedge monitors to IEM systems due to fears such as unnatural sound or being disorientated by a traditional stereo mix. German company KLANG:technologies has developed a solution with its KLANG:fabrik and revolutionary 3D IEM processing.

Rather than providing a simple left and right mix, the 3D IEM gives artists the ability to manipulate where the sound appears to be originating from, creating a simulated acoustic environment. The KLANG:fabrik also puts the power of an artist’s mix in their hands with an app that is controlled on a tablet. Pascal Dietrich, Founder and Chief Marketing Officer of KLANG:technologies, stated: “It’s all about unrivalled sound transparency for live and studio musicians. Our 3D audio technology lifts your stereo headphones and IEMs to the next level.”

In last month’s TPi, we covered a showcase of the new KLANG system courtesy of its UK distributor, HD Pro Audio. After the event Andy Huffer, HD Pro Audio’s Sales Director, commented: “If initial client reaction is anything to go by, KLANG:technologies’ 3D IEM processing has the potential to be the next major step in the evolution of stage monitoring. With multiple musicians able to control their own mix with standard touch screen tablet devices plus the revolutionary effect of the 3D processing, they can bring greater separation, clarity and more importantly, reality to their personal mix.”

Several artists and bands have already sung the praises of the KLANG:fabrik including John Dolmayan, drummer for System Of A Down. The system had not been used on a tour in the UK until HD Pro Audio supplied it for producer and composer, Nitin Sawhney. The producer, who tours with eight other musicians, entertains fans with his fusion of traditional Indian music and everything from drum ‘n’ bass to folk-influenced pieces.

Speaking to Sawhney backstage on the last date of his tour, he discussed about the KLANG:fabrik, stating: “It is very effective in allowing everyone to work with their own sound and control exactly what they are hearing in their in-ear monitors. It’s a fantastic system and it has noticeably improved everything for us. We are able to play a lot tighter and really listen to ourselves as well as each other. This means we get to enjoy the gig and that often means the audience enjoys the gig as well.”

Sawhney’s FOH engineer David McEwan explained how the relationship with HD Pro Audio came about: “I got in contact with Andy Huffer from HD Pro Audio because I wanted an Avid S3L to take on this tour.” It was at this time that McEwan saw the KLANG for the first time and got offered the option to take it on the road.

“We had three days rehearsal when Tom Turner from HD Pro Audio came out to set up a KLANG system and to show us how to configure it with the Dante matrix.” For this short tour, McEwan explained that he used a Focusrite RedNet AM2 device to take analogue feeds from the Avid stage boxes and convert to Dante which then feeds into the KLANG:fabrik 3D IEM processor.

Backline Technician for Sawhney, Paddy Dell, spoke about his experience with the KLANG app. “After two rehearsals all the guys on stage were more than happy with using the app. Nitin himself was blown away by how effective it was and how easy it was to use.”

McEwan added: “Nitin hasn’t even touched his set up since we rehearsed. He got it right and left it.” The crew were keen to comment how smoothly this whole tour had been running and it saved so much time while setting up at soundcheck. “With a band like us with nine musicians and several instruments, soundcheck can be a bit of a nightmare. The KLANG system has reduced are souncheck time significantly.”

Huffer summarised: “Hats off to Nitin and the band, and to David for taking the plunge with this great new live performance technology. Hopefully he’ll be among the first of many converts to the wonderful world of KLANG.”

To learn more about the system, KLANG has produced a short video available online that demonstrates its 3D monitoring technology and can be experienced with any stereo headphones. You can also download a trial version of the app to get a feel for the user interface.