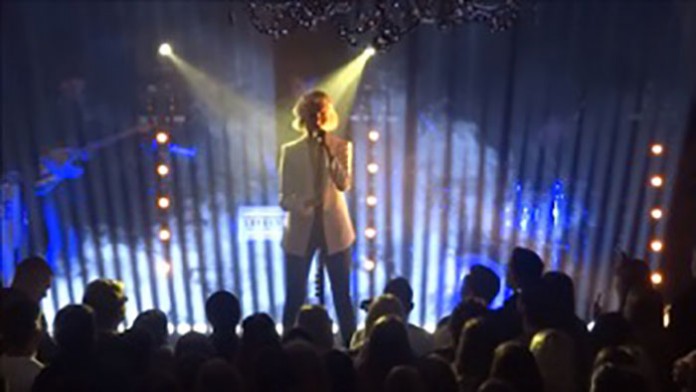 The 21-year-old Scottish-Swedish singer Nina Nesbitt has attracted serious attention and a growing fan base since the release of her 2013 Way in the World EP. Several Top 40 singles later, the Edinburgh-born artist has replaced her earlier indie-pop flavour with an edgier sound in her Modern Love EP. Raw, powerful and replete with impressive synthesised hooks, the EP’s songs, like the hit “Chewing Gum,” deal with the shifting and often unpredictable tides of human relationships. A tour in support of such music calls out for dramatic lighting on stage, which is precisely what LD Ollie Wilkinson of Arranpaul is providing in the Modern Love Tour with the help of Chauvet fixtures.

Recognising the powerful emotional currents running through Modern Love, Wilkinson has added a theatrical element to his tour design through the adroit use of back lighting. He’s also accentuated the natural beauty of his client, who has modelled for Calvin Klein, Estée Lauder and American Eagle, among others, by focusing soft light around her.

The BEAMbar LED panels were placed on pieces of vertical standing truss positioned at the rear of the stage, with each piece of truss adorning a Rogue R1 Spot perched on top. The PiXPars were attached to the back of these towers, allowing Wilkinson to light the band from behind.

“Nina wanted the production to look extremely theatrical and photogenic,” said the LD. “I was able to come up with a scalable theatrical lighting concept which placed Nina centre stage without detracting from the songs.”

Wilkinson chose the Chauvet DJ BEAMbars to create shafts of light at the back of the stage. The BEAMbars also enabled Wilkinson to recreate Nesbitt’s popular video for “Chewing Gum.” He continued: “In the video, light seeps in and is reflected onto Nina through window blinds behind her. The BEAMbars re-create the feeling of light being reflected in this way, allowing Nina’s shadow to be reflected on stage as it is in the video.”

The Rogue R1 Spots allowed Wilkinson to create powerful beams of light behind the artist whilst also being used as breakups and audience lighting. The fixtures also had a more practical advantage. “Power isn’t often one of my considerations as a lighting designer, but with these fixtures only pulling one AMP each, they could be taken into any venue with any power supply,” commented Wilkinson. “This is something that is truly a game changer for touring shows, especially when you’re playing many different-sized venues as we are on this tour.”

Wilkinson also praised the performance of the PiXPars, which were placed to cover lower angels on stage to light the band with bold and rich primary colours, along with soft pastels. “With the PiXPars I was able to light the instruments of the band in addition to the singers,” he said. “They allowed me to illuminate Nina as the main focus, whilst having the bass guitar and drums softly lit in the background with soft hues or deep blues for that classic theatrical effect.”

With 21-year-old Nesbitt teetering on the cusp of mainstream breakthrough, Wilkinson’s theatrical lighting design certainly awarded the artist with the onstage credibility a performer at her level deserves. Wilkinson concluded: “It was an extremely enjoyable tour to design, and with her creativity reaching its peak, I’m confident that my selective use of Chauvet fixtures were able to do her justice. I would also like to take this time to say thanks to Nina’s Tour Manager and great friend Curtis McKenna for his ongoing support both on and off tour.”