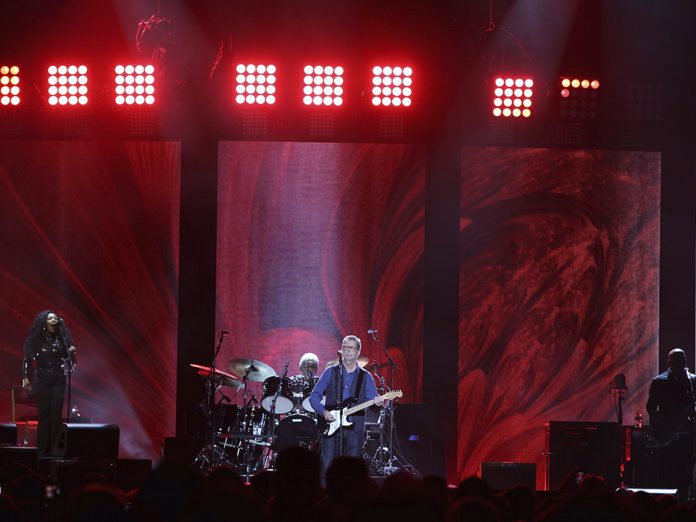 Eric Clapton is regarded as one of the greatest guitarists of all time and is giving fans one more musical gift, as he performs a limited series of concerts in New York, Los Angeles, London and Tokyo.

The concerts represent a return to the stage for Clapton, who announced his retirement from touring over one year ago. Providing an appropriately evocative look for the opening show at Madison Square Garden on the 19th of March was an engaging light and video design by the artist’s long time designer Dave Maxwell. A collection of 39 Chauvet Professional Nexus panels played a key role in bringing Maxwell’s vision to life.

Like all the gear in the MSG rig, the Nexus panels were supplied by Upstaging,. Maxwell flew the RGB panels on winding curves of truss over a 56’ wide by 12’ tall letterbox formation of 10mm video wall. The Nexus panels anchored the look on stage and unified the seven sections of video wall for the live audience and cameras.

“We positioned the Nexus panels on the main curves within our truss system,” said Maxwell. “When they’re placed symmetrically along the long winding curves, they help to emphasize and complement the length of the curves, which creates a more balanced look. The curves where the rear video is mounted are long and low, while the curves above them are wide and high. Having a large number of Nexuses glowing on these curves frames the stage and provides great camera shots.”

The latter point was especially important to Maxwell’s design concept, as live camera shots were shown roughly 50% of the time on the large video wall. These live images were taken with a long lens camera at front of house, as well as with some handhelds, robocams and lipsticks placed at various points in the venue.

Maxwell drew on the vivid colours and generous output of the Nexus panels to create some lush stage washes during the Madison Square Garden concert. “We had no problem washing the arena with them, given their brightness,” he said. “In addition to using them as a glow for the audience, we also relied on them as background for the camera.”

The Nexus panels were also used for playful chase scenes during the 100-minute show, which began with “Key to the Highway” and ended with a double encore of “Sunshine of Your Love” and “Before You Accuse Me.” Maxwell also created different geometric patterns by using a varying numbers of the 16 20-watt LED cells on each Nexus panel.

“We did full inner and outer patterns at different points in the show,” he said. “At some points, we used just the four central LEDs of the Nexus panels to emulate the classic 4-cell blinder look, which fit the mood of some of the songs. I appreciated how the Nexus panels can be quickly manipulated into the lighting design with little programming time. Our design was there to support and honour over 50 years of great music — and the Nexus panels helped us do that.”