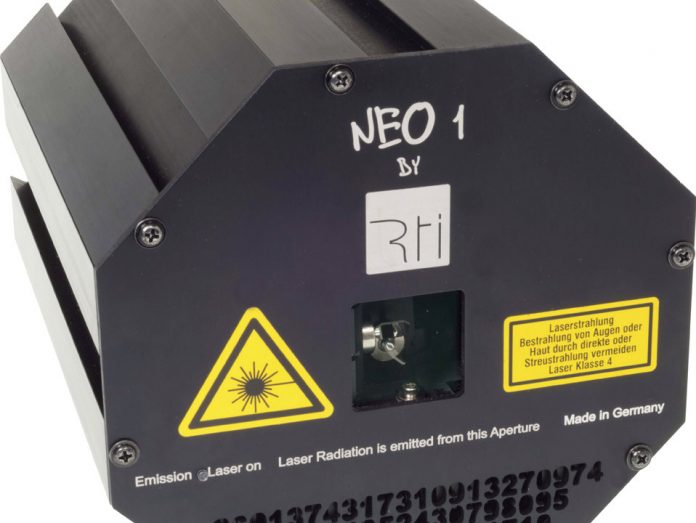 With the RTI NEO ONE, Laserworld presents a completely new designed laser unit that is conceived as modular effect for professional productions. DMX/ ArtNET makes it compatible to existing control infrastructure; no other control system is required. The RTI NEO ONE is designed as multi-projector-laser-system: Several units can be attached to each other with a quick-lock system. Due to the octagonal shape, it is not only possible to use several units side-by-side, but also allows to create shapes of laser systems or mount them at unusual positions, like e.g. flanking the sound-line-arrays on big stages, arranged as circle or in other shapes on stage.

The RTI NEO ONE is an extremely powerful white light full colour laser system. With a power of 24W RGB per meter or 4W RGB per unit, it is also well suited to large scale and long throw applications. An internal playback system can be individually configured with custom patterns or animations (free software for creating ILDA patterns is included).

The high-speed scanning systems allow for graphics and logo projections as well.

Up to six units of the RTI NEO ONE can be run with one power supply. Units and power supply have the same octagonal shape; so can easily be combined with the same type of quick-lock mounts.

The dimensions of the RTI NEO ONE are very compact: Only 220x185x185mm at a weight of only 6.5 kg make it easy to use many of these units with a small footprint.

The RTI NEO ONE was especially designed to be run as an array, matrix or for creating shapes of lasers. The capabilities of these systems exceed the ones of the RTI NEO SIX by allowing for more power and even more flexible ways of using them.