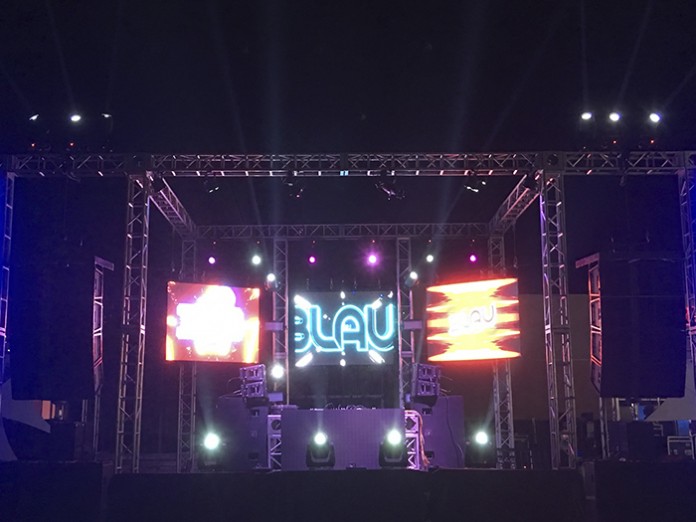 As Elation Professional lighting gear helped ring in the New Year at events across the US, perhaps no celebration saw more enthusiastic revellers than the Resolution 2016 EDM party in Los Angeles.

Held on 31 December at the Garden Walk in the heart of the Anaheim Resort in Los Angeles, the Resolution event, a collaboration between Social Management Group and Heat Ultra Lounge, saw top acts 3LAU, WeareTreo and ANDR3X hype a charged crowd across multiple stages.

Lighting / Set Designer and Production Manager for the main stage was Ramiro Aguilera of Show Production Technologies, the southern California-based production and rental company that provided the Elation lighting for the event. Asked to design an EDM stage, Aguilera said the characteristics and location of the event demanded a compact stage: “Of course those of us who work in EDM festivals know very well that nothing about an EDM stage is small,” he commented.

“So the challenge was how to design and produce a compact stage that delivered the immersive experience of an EDM stage while fitting in the assigned location. Having small dimensions on both width and depth, my only advantage was that I had all the height I could use so we picked three specific Elation fixtures for the task.”

Those fixtures included the new Elation Platinum HFX hybrid moving head, the Elation Platinum Beam Extreme and the Elation Platinum Spot 35 Pro. “All three fixtures have a tremendous amount of light output but still have a compact body frame,” he continued. “For the stage and DJ booth I needed a compact fixture that had a small footprint but gave me the most amount of effects since that was the prime location of the stage. The Platinum HFX, being a hybrid, allowed me to use it in looks that involved just beams as well as looks that involved just spots.”

The Platinum HFX is the latest versatile luminaire in Elation’s line of award-winning three-in-one hybrid effects. Packed with plenty of colour, graphics and effects options, the mid-sized light houses a 280W Philips MSD Platinum 14R lamp and can emit up to 12,000 lumens of power. “I was very satisfied with the light output of the Platinum HFX for its compact size, but I was most impressed with how good its optics was when we switched it to spot mode. This gave me confidence to use it more in spot mode than just a few looks.”

Also in the rig was what Aguilera considered the workhorse light of the main stage – Elation’s touring industry staple beam light, the Platinum Beam Extreme. “Because it’s a beam fixture its role is to create aerial effects on a continuous basis,” he added. “So I placed them on the top of the rig as well as the back of the rig. Then my big spot fixture, the Platinum Spot 35 Pro with its large light output, allowed me to create a very defined look with gobos and colours.” Effect fixtures in the rig consisted of the Elation EPAR QW LED PAR light and the Protron 3K LED strobe, which Aguilera said allowed him to use multiple large strobe fixtures with a small power draw. Lighting control for the show was via an Elation-distributed HedgeHog 4 console.

Of course, no production company can produce such a professional looking stage without a talented and hard-working crew. “Having the right programmer for this type of music is very essential since lights synchronised to music play a big role in the experience,” he said. “I want to thank Anthony Gomez, my lighting and media content programmer and lead tech. Anthony, being an EDM festival junky, brings that feel to the programming so the stage becomes one with the music.” Aguilera also thanked lighting techs Franky Perez and Alex Gomez for all their hard work.