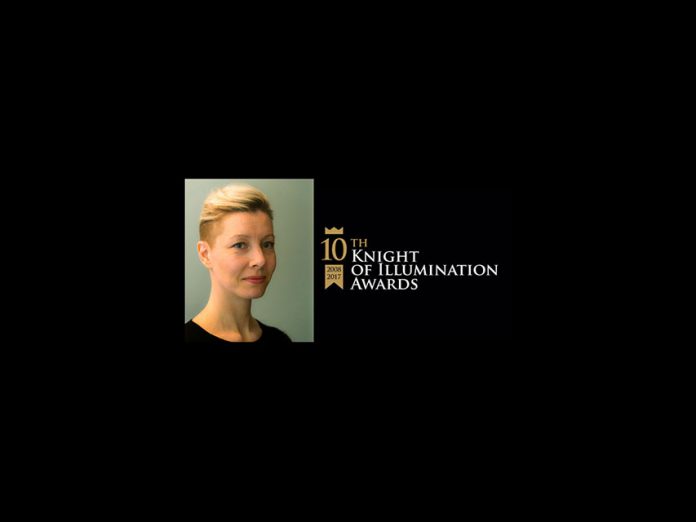 The Knight of Illumination Awards 2017 (KOI), which celebrates the creative talents of international lighting and digital content designers working in the UK, is delighted to announce the appointment of a new chair of the Concert Touring & Events category – Jess Allan.

Allan has worked in professional show lighting and event production for almost 20 years, working in various roles for companies including Martin Professional and TAIT. In addition, Allan has been a member of the organising committee for Showlight, the prestigious quadrennial lighting conference, for the past eight years. Most recently, Allan has launched Productionomics, a company providing specialist consultancy services to the event production industry, including data research, product launch, strategy planning and project work. In addition, she is currently working on key data research/recording specifically in the field of concert touring.

Allan will chair the panel of judges assessing the Concert Touring & Events category, and KOI is delighted that Jonny Milmer of creative design agency Imagination, lighting designer and video content creator Miguel Ribeiro, Kelly Murray, editor of TPi magazine and Claire Beeson, editor of LSi magazine, return to their roles as judges in this category for 2017.

Allan commented: “I’m very excited to be involved with the Knight of Illumination Awards. I’ve watched it grow to become a key event in the show lighting calendar. It’s special because it focuses solely on design; it highlights the achievements of our hugely talented designers both to our industry and also for the outside world, which is very important. I’ve worked closely with many LD’s over the years, and have always enjoyed the creative side of show production, so I’m delighted to be joining the KOI team this year.”

Allan takes over the role of chair of the Concert Touring & Events category from Coral Cooper. Coral, a previous winner of the KOI’s Enrico Caironi Lifetime Recognition Award, will remain an integral part of the KOI Awards in 2017 as an ambassador for the unique event.

LD, Durham Marenghi coordinator for KOI, commented: “It’s great to hear that Jess will be joining the KOI judging team as chairperson for Concert Touring & Events category. There are not many in our industry that will not know Jess. Indeed, she is so integral in the lighting family that when the Chinese copied the first Mac 2k I saw an e-mail announcing the product still with her name on the press release which they had copied verbatim as well! Welcome Jess.”

Submissions are currently open for both the Television and Concert Touring & Events categories, with shows performed or broadcast between 1st August 2016 and 30th June 2017 in the UK eligible for entry. As with previous years, the Theatre category can only be nominated by the judging panel. Submissions can be made for TV and Concert Touring & Events by visiting the KOI website. The shortlists will be announced in August.

In addition, The Enrico Caironi Lifetime Recognition Award will be presented to an individual, whose contributions to the lighting industry have gone above and beyond the call of duty, in turn benefiting their colleagues, the industry and the wider world.

Originally conceived by Claypaky in 2008, in cooperation with Durham and Jennie Marenghi, the Knight of Illumination Awards is now organised and managed by the prestigious industry organisations STLD (Society of Television Lighting and Design), ALD (Association of Lighting Designers) and The Fifth Estate Ltd. The KOI Awards 2017 is also supported by media partners ETNow, LSi and TPi magazines.