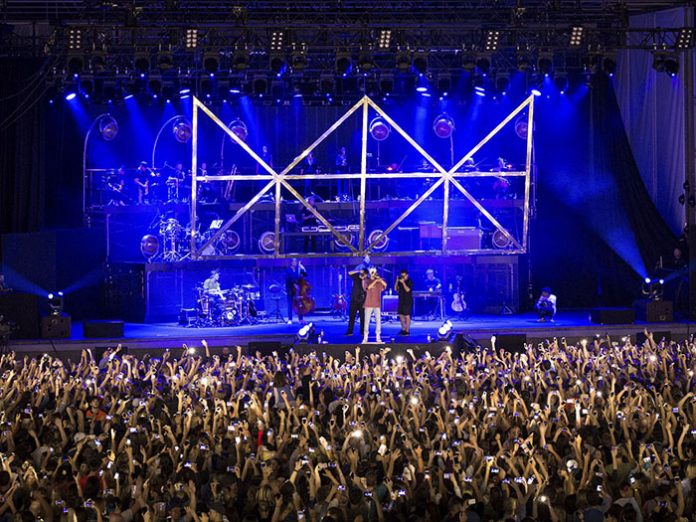 One of Germany’s most influential artists of recent years is pop rapper Cro, who is just wrapping up an MTV Unplugged Open Air tour that played dates across the country this summer. Lighting design was by one of Germany’s preeminent designers, Gunther Hecker from CUE Design, who incorporated Elation Professional Platinum FLX hybrid moving-heads supplied by German production company satis&fy.

Known for wearing a panda mask when he performs, Cro’s music is a catchy fusion of rap and pop that, based on his audiences, attracts fans of all ages. His popularity is at an all-time high and for the MTV Unplugged Open Air tour he was supported on stage by a 20-member strong orchestra positioned across three tiers and fronting horizontally-tiered LED screens.

Gunther Hecker handled the entire visual design for the tour – lighting, set and video – his first year working with the artist. It was also his first test drive of Elation’s award-winning multi-functional Platinum FLX fixture, four of which he placed on stage, two each downstage right and left, with a further 12 positioned behind the bottom row of LED panels. Working from stage level, beams from the FLX’s were projected from behind and through the screen.

“It’s been interesting to test the FLX on this open air tour,” said Hecker, who was introduced to the fixture by Martin Heuser, Global Director Lighting and Rigging Services at satis&fy, which he has worked with for many years. “After I saw a shootout of the fixture at the satis&fy facility in Karben I was sold on it. They’ve worked out well and I’ve had no problems with the fixture on this tour.”

Hecker has done the lighting for many MTV Unplugged shows before, which by definition are a bit more subdued than plugged shows. Cro’s music was ‘toned down a bit’ for the unplugged version compared to his normal touring set, Hecker says, and that went for the lighting as well. “On Cro, I used the FLX through the whole show as both a spot and beam light and used a wide palette of colours. I utilised them when the LED screen was both off and on and especially when I had them in white light, they really cut through the LED video.” The Platinum FLX’s were the only automated fixtures on the tour that the production carried themselves with all other intelligent lighting sourced locally.

satis&fy, which handled staging, scenic, video and lighting on the Cro tour, added 100 of the Platinum FLX fixtures to their inventory earlier in the year and have kept the fixtures busy on a variety of events ever since. The MTV Unplugged Open Air tour, which ran from May through August, was its first European tour outing. Cro will hit the road again later this year, playing arenas.