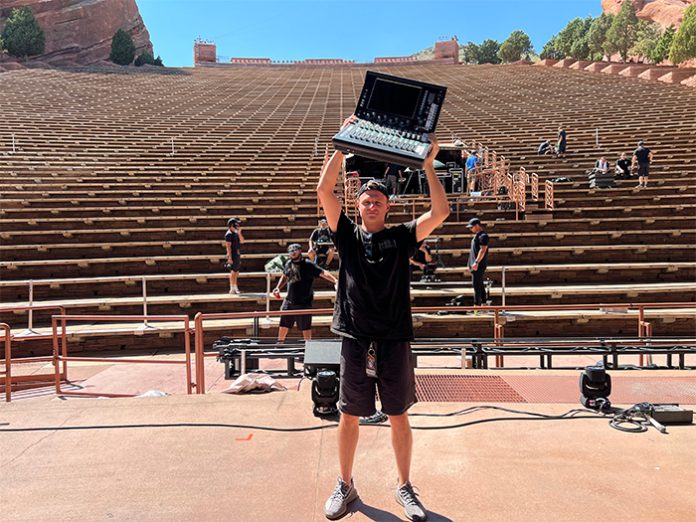 Front of house engineer and tour manager Logan Beaver was hesitant to switch to a compact console for his major touring gigs. “A friend of mine was making these great sounding mixes on a dLive C1500,” recounted Beaver. “But I still never thought I could mix my band on just 12 faders.” After finally giving it a try, his mind was changed. “I just instantly fell in love with it. I’ve never looked back since.”

Beaver now owns two dLive CTi1500 surfaces, which he currently uses as an arena tour front of house and monitor split for heavy metal band Motionless In White. One surface is paired with a DM48 MixRack, featuring 48 mic preamps and 24 line outputs processed via a powerful XCVI 160×64 FPGA core. The other connects to a DM0—a full-featured compact MixRack for use cases where no analog I/O is necessary. In this case, all audio is fed from the DM48 via a 128×128 channel gigaACE card with ultra-low transport latency. “It’s just so easy how it all works together,” noted Beaver. “We use the new Gain Sharing feature over gigaACE so that both front of house and monitor positions can control the preamp gain.”

The simplicity of dLive’s control also comes in handy during soundchecks and rehearsals, when a monitor engineer isn’t always available. “I can just face the console towards the band, and they can easily make adjustments to their monitor mixes themselves,” explained Beaver. “They really love being able to walk up to the console and make changes on their own.”

As far as channel processing, Beaver did not feel the need to add any outboard FX. “I only use the built-in dLive DEEP processing and I really love the new Bus Compressor. I put that on just about every bus in my mix,” commented Beaver. “I also love the 16T compressor model for simple one-knob adjustments on toms and overheads.” For vocals, Beaver’s go-to is the OptTronik DEEP compressor, which is inspired by a legendary tube-driven, electro-optical leveling amplifier.

The form factor of the CTi1500 is especially important for touring acts like Motionless In White, as it simplifies travel and load in/load out. “It’s 100% the easiest front of house console you can tour with,” said Beaver. “They’re under 70 pounds, so they can fly anywhere. We’ve been flying between continents and the consoles have held up perfectly. It only takes about 90 seconds after the show ends and we’re packed up and ready to move. I couldn’t imagine it being easier.”