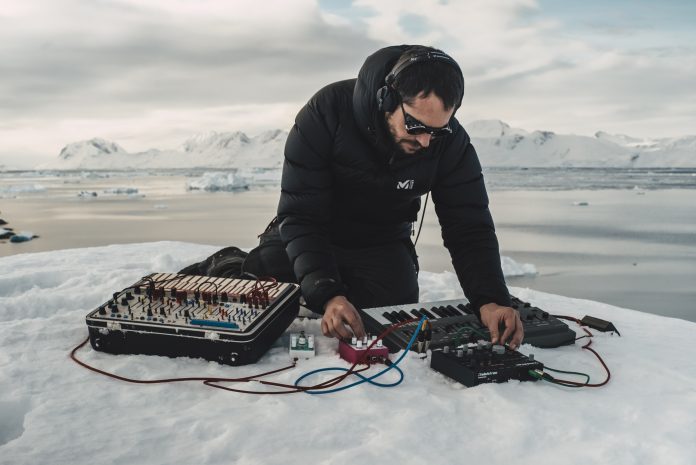 Romain Delahaye, aka Molécule, is an electronic music producer acclaimed by many leading DJs (including Laurent Garnier and Arnaud Rebotini). He specialises in music created entirely in-situ, no matter how harsh the conditions.

Behind this quest lies a clear and challenging goal: to take electronic music into a new sound dimension. In fact, all the sounds on his latest album, -22.7° C, released in February 2018, were recorded during a five-week stay in a small fishing village in Greenland.

But Molécule doesn’t stop there: he has taken on the technical challenge of transposing the sounds of these harsh environments to live mix concerts. This involves leveraging experiential technologies and imaginative show design to achieve a sense of immersion. For the audience, it might mean presenting the show in an igloo at temperatures below zero to recreate the album’s recording conditions, or else in complete darkness to sharpen their sense of hearing.

On the technical side, the artist adopted L-ISA Immersive Hyperreal Sound technology, so that his compositions would be played accurately, in minute detail, and fully spatialised to create a genuine sense of being enveloped by the music and the mood.

“Being a pioneer is demanding. Not only does it require a great deal of time and involvement, it means working with reliable partners who are willing to listen,” explained Romain Delahaye. Romain found this reliable partner in Hervé Déjardin, a Sound Engineer working at Radio France, specialised in immersive audio. In short, a man of experience. It was Hervé Déjardin who guided the producer in his quest for a solution that could meet his demands, and who advised him to implement L-ISA to optimise his audience’s musical experience.

Romain Delahaye shares this pioneering spirit with L-Acoustics, an audio innovator since it was founded in 1984. According to the artist, the teams from L-Acoustics L-ISA Labs provided invaluable assistance in resolving the long list of technical challenges raised by his ambitious undertaking.

It was through Guillaume Le Nost, L-ISA R&D Director, that Hervé Déjardin and Romain Delahaye discovered what L-ISA could bring to the immersive aspect of the Parisian DJ’s live shows.

Following their initial exchanges, Romain and Hervé went to L-Acoustics headquarters in Marcoussis, in the suburbs of Paris, for a period of pre-production. They tested the multiple creative possibilities afforded by L-ISA spatialisation and object-based mixing within the L-ISA Controller which proved to be easy to use.

In fact, In spatialising music for the set, Molécule went beyond simply adjusting the balance of various sources; he relied on Hervé’s skills to create several snapshots and automation needed to produce the show’s recurring movements, such as moving the sound of a snare drum in a circle around the audience, making a layer of sound bounce off two virtual walls like a ping pong ball, and using L-ISA technology to fire off random sound movements, such as sending out a sound to the right, making it cross the hall back to the left, stop in the middle, bounce off an invisible wall, and then another to attenuate it… Given the potential of the L-ISA sound design tool, anything seems possible.

The fruit of this immersive exploration was brought to the audience at Molécule’s first live mix using L-ISA on October 12, 2018, at the Rex Club, a landmark of the Parisian electronic music scene. With a nearly 30-year legacy in techno, the Rex Club has always embraced new perspectives and so it was only natural for Molécule to give the world premiere of his immersive live mix in this prestigious Parisian institution.

L-Acoustics Certified Provider Melpomen also worked closely with the Radio France teams on this operation. Representing the installation’s centrepiece, the L-ISA Processor can channel up to 96 inputs to 64 outputs. Thanks to an 11.1 immersive configuration of Syva colinear speakers, the production team was able to provide uniform coverage and ultra-precise spatialization. The 140° vertical directivity of the Syva speakers was an obvious asset for the deployment of L-ISA in a relatively confined space. Very prevalent in Molécule’s compositions, the bass frequencies were reproduced via two Syva Low speakers, and the infrabass frequencies via four KS28 subwoofers positioned throughout the venue.

The entire Syva system was amplified via LA4X amplified controllers; with the KS28 subwoofers powered by an LA12X. This power distribution allowed Delahaye and Déjardin to reproduce the audio dynamics present in the compositions on 22.7° C. The optimal listening area created with L-ISA allowed the artists to dispense with stage monitors since the duo positioned themselves in the middle of the audience so that they too could benefit from their set’s immersive experience.

At the controls of his QL1 console for the evening, Hervé Déjardin managed his spatialized mix using the L-ISA Controller software. He was able to adjust—in real time—the positioning and width of each of the 16 sound objects, as well as the distance between the sources. In the words of Romain: “Using L-ISA technology added a new immersive dimension to my work; the audience had to leave their usual points of reference at the door. With no technical worries, we were able to simply enjoy playing. In the end, our set, initially scheduled for 55 minutes, lasted an hour and 40 minutes. We were the first to engage in this kind of sonic experiment.”

The audience’s rave reviews focused primarily on two aspects: on one hand, the sound quality delivered by L-Acoustics technology, and on the other, the precision and motion of the spatialisation, a first for most listeners.

Hervé Déjardin was full of praise for L-ISA, expressing that it opens up new possibilities: “Since working in France Inter radio’s immersive audio department, I have noticed a strong similarity between L-Acoustics’ DNA and our own. We are constantly looking to push back the limits of the venue space. Stereo is great, but it is just a tiny part of what spatialisation has to offer. It would have been unfortunate to simply stop there.” And his opinion on the performance of L-ISA is that of a pro: “One thing is clear, an immersive sound configuration with an arrangement comprising L-ISA and Syva speakers brings a considerable degree of precision to the spatial creation; it’s quite simply incredibly effective. I played the set in a club, but it sounded as if it was in a studio.”

The success of the Rex Club show was such that Molécule and his production and management team, in collaboration with Radio France and L-Acoustics, will bring a version of this spatialized sound performance—ACOUSMATICS 360°—to additional locations including an upcoming event at one of France’s leading music festivals, Le Printemps de Bourges, on April 18th 2019.