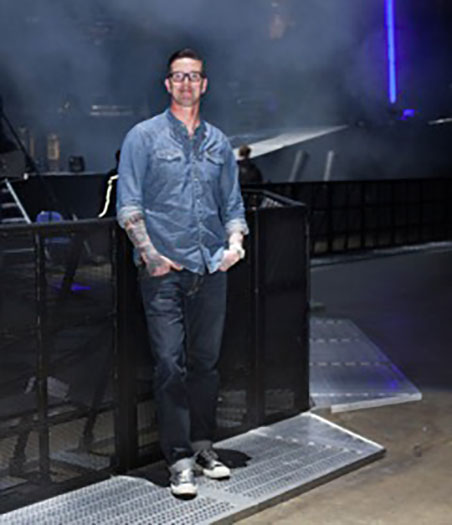 Muse is the latest band to benefit from Mojo Barriers’ specially-designed touring barrier as 160 metres of the system keeps crowds safe throughout ‘The Drones World Tour’.

Mojo Barriers was contracted to ensure audience and artist safety at all the US and European dates of Muse’s nine month tour. Mojo supplied 160 metre of barriers, ADA and heavy duty cable ramps along with custom designed Double Flex Corners to allow the Muse production team to pass cabling under the barriers safely.

Mojo’s JB Dolphin and John Wagoner oversaw all 27 Mexican and North American dates, whilst Stanley Jilesen oversaw the 50 shows in Europe. Muse played in the round, with a circular stage in the middle with two catwalks at either end. To compliment the unique stage layout, Mojo’s Vario Corners were widely used to work with the contours of the stage. The tour has been celebrated for its use of the latest drone technology by Motion Business, who worked with the production team to fly giant drones above the audience throughout the show.

Mojo US’ John Wagoner said: “The Drones World Tour has been groundbreaking with the bands use of technology and we’re proud to have been involved with such a spectacular production. During rehearsals the production team had some last minute changes that augmented the barrier layout, however we were able to deploy the crucial parts to accommodate these changes and ensure the tour didn’t miss a beat.”

Mojo’s Stanley Jilesen said: “Muse’s stage design allows the band to offer greater intimacy and get as close as possible to their fans. We were able to accommodate this layout using specialist equipment from our stock list, as well as custom designed barrier pieces, which enabled us to install the desired barrier configuration. Muse’s use of technology within their stage show has enabled them to produce a truly brilliant spectacle and we’re proud to play a part in this.”

Chris Kansy, production manager commented: “Muse’s Drones World Tour isn’t a straightforward one-size fits all show. The tour is sculpted around a bespoke stage layout with multiple entrances and multiple cable routing in and out. The set up depends on a number of factors including the venue, where the band enters and how we need to feed equipment in and out of it. We rely on carrying a range of spare equipment Mojo Barriers has supplied us to enable us to adopt the configuration that we need for the show, and having the right parts to do this is important.

“My relationship with Mojo Barriers has been a long one and I have huge trust in the team and their kit. Mojo understand our requirements and have gone out of their way to ensure we have all the special corners and gates needed to stage this impressive show.” The Drones World Tour officially begun on the 17 November 2015 in Mexico’s Palacio de Los Deportes and will end at Hungary’s Sziget Festival on the 10 August 2016.