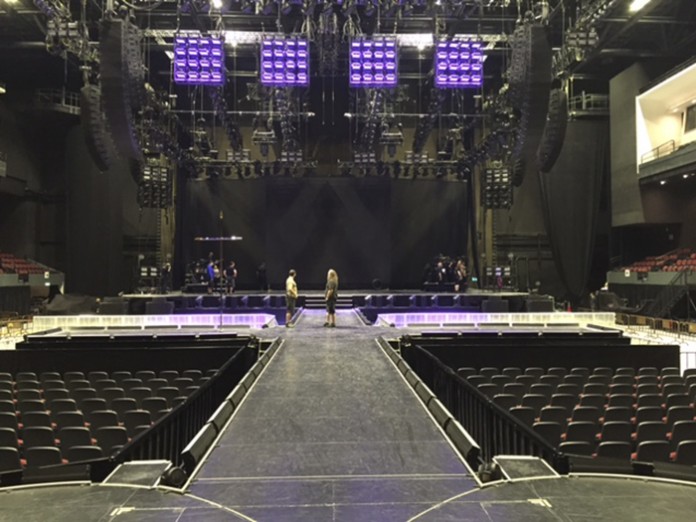 Mojo Barriers supplied a variety of barrier products for the front of stage and front of house production areas, for the European leg and two Asian tour dates of Madonna’s Rebel Heart World Tour.

Rebel Heart Tour is the tenth worldwide tour from Madonna and supports the release of her 13th studio album of the same name. The tour kicked off in September in Montreal, Canada and ran for six months, visiting 22 countries worldwide.

Mojo Barriers was contracted to ensure audience and artist safety for all of Madonna’s 25 European tour dates, as well as at her shows in Taipei and Macau, which both took place in February 2016. The European leg of Madonna’s tour began with the Lanxess Arena in Cologne in November 2015 and visited 12 European countries.

Mojo Barriers supplied almost 200 pieces of kit, including vario corner sections, snake gates and flex corner sections for the front of stage and front of house production areas. Mojo’s wide range of special curves and corners in black aluminium made it an ideal choice, allowing the barrier configuration to match the complex stage design of a cross and heart shaped B stage. All the barriers were supplied in black aluminium, in line with Madonna’s wish for the barriers to be unobtrusive.

Madonna is famed for her inventive stage shows and this tour was no different. Madonna’s large elevated stage was complete with an extending catwalk with a circular stage half way down and heart-shaped stage at the end. Although not a challenging layout, this install did create some challenges as Stanley Jilesen, Mojo Barriers’ Project Manager commented: “Madonna is one of the world’s biggest artists, with state of the art production, so it was an honour to be entrusted with both audience and artist safety during her European tour dates. Although this wasn’t a challenging install, the shape of the stage did make this slightly more complex as Madonna wanted the barriers very close to her stage to increase intimacy and enable closer contact with her audience. The shape of the stage meant it was slightly more difficult to get these barriers as close as was requested, so we utilised specialist stock, including our corner sections, to ensure we got the shape spot on.” He continued: “The American tour shows were seated, which meant there was not a lot of barrier pressure during the show. Here in Europe, the standing shows meant the barriers needed to be able to withstand this increased crowd pressure. We worked closely with the PM, Jason Danter, to design a barrier layout that suited the show and enabled Madonna to be as close as possible to her audience.”