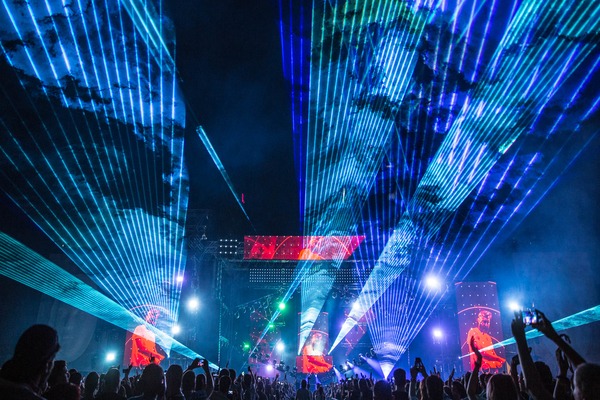 The massive MR5 heavy-duty roof measured 31 by 18 metres and covered the main stage of the first edition of the four-day event held from July 20–23 2017, and featured a total of 4 stages.

A.S.C. Systems Sound & Light Co-owner Alex Oprita commented: “We’ve been working with Milos [Structural Systems] for the past 10 years and that’s why we chose them. They have good products. It’s what we were hoping for [financially].”

The customised MR5 roof was an intensive project that made full use of Area Four Industries’ Technical Sales service. Norbert Tripp, Area Four Industries Technical Director, carried out the engineering design for the roof and static calculations, including the substructure. At the beginning of the project, members of the A.S.C. team met with Tripp and Milan Kolousek, Milos Structural Systems Sales Representative, to define their requirements for the roof and agree on the most important details.

Tripp also worked closely with the team at German scaffolding company Layher, which provided the scaffold and stage decks for the roof. The Layher stage was an integral part of the roof and it was crucial to work closely with the Layher team to carry out all necessary engineering calculations.

The final structure delivered to A.S.C. was a highly customised Milos Structural Systems MR5 Heavy-Duty pitched roof measuring 31 by 18 metres and mounted on a 1.8 metres high, with a clearance height of 11 metres and featured a cantilever of 2 metres in front and 0.7 metres in the rear of the stage.

Tripp designed the roof to handle a 24,000 kg uniformly distributed load (UDL) on the horizontal beams above the main stage, and an additional 7,000 kg for PA and LED-screens in each side house. The structure was also designed to withstand maximum gust speeds of 109 km/h.

Tripp, Kolousek, Lukas Zeman and Ales Roucek, supported the roof build-up, which took nearly 5 days. The Layher stage was constructed on the first day and then build-up of the Milos roof took an additional 3 days to complete.