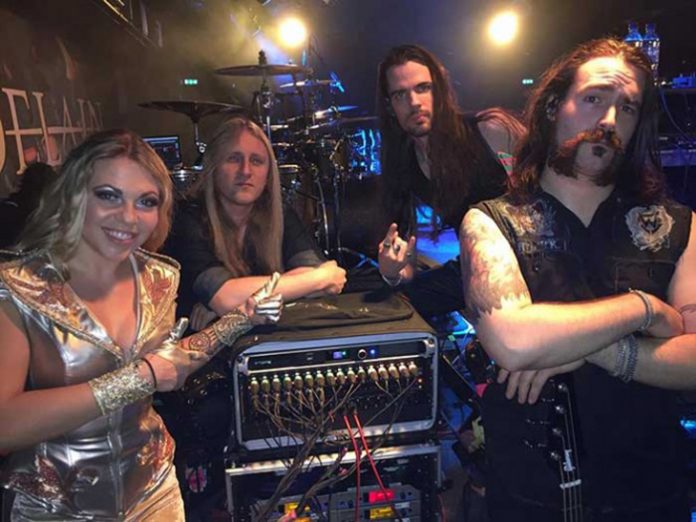 Canadian hard rock band Kobra and the Lotus are this week finishing up a successful 35-date autumn European Tour which has seen the five-piece visit 18 countries in the continent in support of their upcoming 2017 double album Prevail I + II. Helping the band travel lightly on the road, and a core element for audio quality, is the Midas M32C and DL32, handling in-ear monitor mixing.

Production Manager Andrew Peters, who just recently completed a stint of shows in the US with UK metal band DragonForce, also made use of the M32C mixing system. “The M32C is a 1U rack mixer which packs all the power of the M Series but lets me carry a 4U rack space, with the DL32 included, straight onto any flight. Ease of transportation is the major selling point for me and the bands I work with, so this is the ultimate mixing system.”

Lead singer Kobra Paige added: “We released the first single TriggerPulse, from our upcoming album early, to coincide with this tour. We really wanted to give it our all with every piece of the production, from wardrobe to sound, and we had every faith in Andrew’s choice of sound gear. The result for us has been incredible, this is the first time we’ve been able to get hands on with our in-ear mixes and take full control of the show.”

Kobra and the Lotus are running inputs and outputs via a DL32 stage box. The AES50 port from the stage box then runs into the M32C and a router connected via Ethernet allows for internet connectivity to the unit. Each member of the band then use the M32 Edit App to adjust their own mixes if required.

“As we’re travelling light, I make use of each venue’s front of house console. The highlight for sure has been mixing on the flagship Midas PRO X console at Backstage Munchen in Germany. Also, getting to mix on the Midas M32 at Yo-Talo in Helsinki was sweet, especially to have our entire sound run on the Midas M Series,” added Peters.

The new double album Prevail I + II is due for release in early 2017.