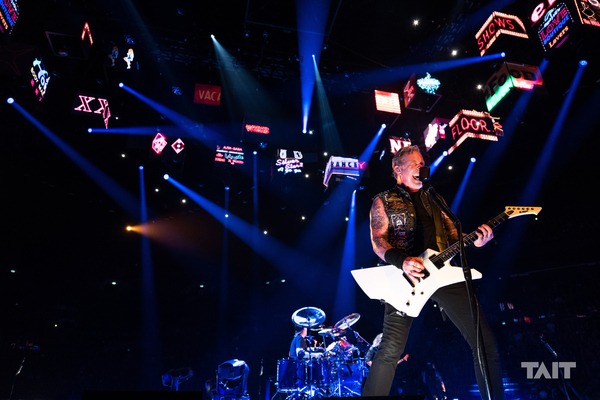 Metallica performs their new single, Moth into Flame, as 100 drones emerge from the prop lifts built into the Tait Towers stage. As the music builds, the drones swarm into several formations and above the band.

The micro drones are 6-inch by 6 inch by 1.4-inch, are equipped with on-board LED Lights and have three speed variations. Each drone has a lift speed of 1.5 metres, horizontal speed of 2.5 metres and a fall speed of 0.5 metres. Verity, the combination of a reliable indoor positioning system with intelligent autonomous drones and a superior operator interface allow Metallica’s show operators to simultaneously control the coordinated movements of the drones.

TAIT presented an interactive look book to explain and visualize the assets provided for Metallica’s WorldWired Tour. Additionally, Tait Towers met up with Dan Braun to discuss his role as Show Director and the design concepts that inspired the show. Dan’s feature on Tait Talks is set to launch on October 10 2017.