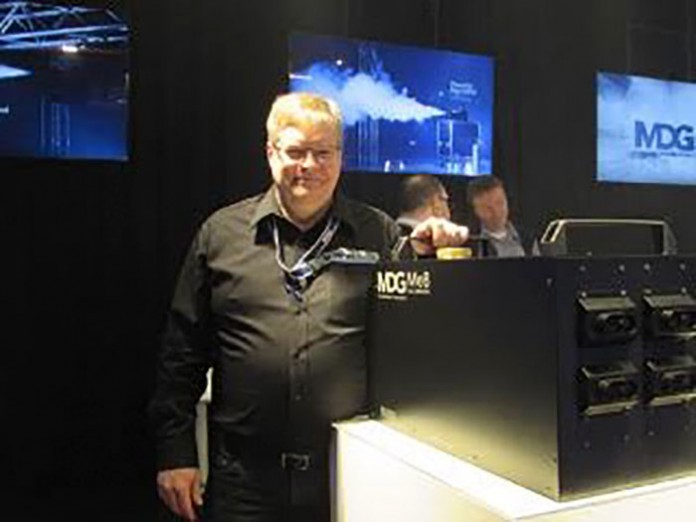 MDG’s stylish new stand was a popular gathering place for those interested in the best of atmosphere generation. The stand was busy on all days with visitors interested in products across the board, and receiving demonstrations of the Atmosphere range, the Me Family, the IceFog Series of low-fog generators and the award-winning, theOne. Customers also benefited from fabulous videos that showed on screen how to unleash the full potential of some of the larger generators that the environs of a trade show were not able to accommodate.

One of these was the new Me8 fog generator which was launched at the show to great excitement. The biggest of the Me Series, the Me8 is an eight-nozzled monster capable of pumping out a massive 800m3 of fog per minute. Visitors were able to witness the speed at which it could fill a 60m x 30m x 8m (15,000m3) space with thick white fog.

“Yet the response was unanimous from our customers,” said MDG CEO, Martin Michaud, “That is, ‘how can that much fog come from such a compact unit!’” The new monster has already garnered some nicknames such as The Beast and La Machine de Guerre and attracted the attention of technicians from the film industry and larger outdoor music venues. “This makes us very happy as this is precisely the market we designed the Me8 for,” said Michaud. “We also hear from our distributors that they believe the Me8 completes the Me Series very well.”

Designed primarily for large-scale applications, both indoor and out, and destined for huge venues and stadia, the Me8 is also perfect for fire fighter and military training, ventilation testing and special effects for movies.Like all members of the Me Series, the Me8 benefits from a 1% – 100% variable fog output that can be controlled directly from a lighting console or via local control, a 100% duty cycle that guarantees high-quality, consistent fog at all levels of output, and MDG’s famous Automatic Purging System (APS). Numerous control options are on-board as standard and include 3 standard USITT DMX512 channels, XLR-5 connectors, a 4-button LCD user interface and RDM compliancy.

“Several customers have asked if the Me8 will be the last of the family,” concluded Michaud. “We can’t envisage anyone needed greater volumes of fog than those generated by Me8, but if the request for an Me16 comes in. MDG never says never!”