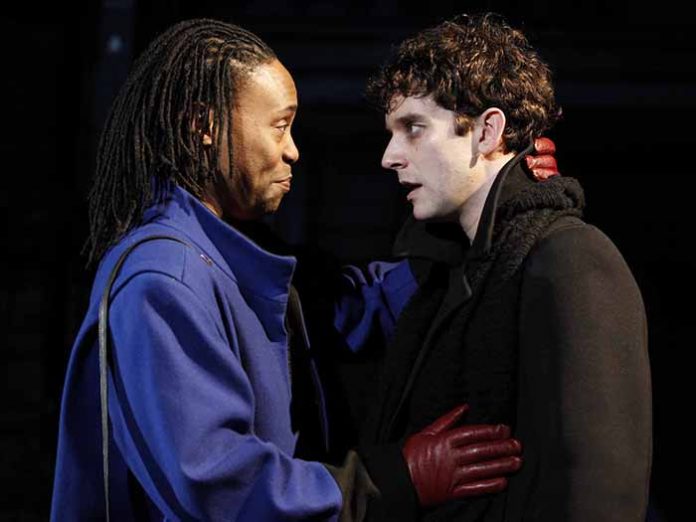 The biggest challenge faced by the designers was the acoustics of the venue itself. “The theatre has been beautifully renovated but did have some acoustical hindrances. There are many surfaces of flat reflective plaster in the theatre that are not ornamental, which makes the sound coming out of the speakers bounce around on the walls and ceiling. This is where we found difficulty in balancing intelligibility while also making sure we had enough fill speakers to overcome the reflective energy. I think in the end we managed to meet the challenge and every seat in the theatre has good sound.”

With the theatre’s acoustical obstacles, speaker selection was critical. The team relied on Masque Sound to provide a custom PA system from KV2 Audio. According to Patridge, “They make point source speakers as opposed to line arrays. They are large and therefore have a lot of low-frequency information in addition to detailed high’s and mid-ranges; they sound like a high-fidelity speaker. We asked Masque Sound to make a large purchase of KV2 equipment for this show and we were very happy they obliged. We have a variety of KV2 boxes in the show including most of the main PA, surrounds, delays and fills. They are a newcomer to Broadway and the sound is incredible.”

For the console, Masque Sound provided the designers with the tried-and-true Broadway main staple, DiGiCo SD7 with theatre software and Waves audio plug-ins. Another interesting component to the custom audio package was the use of Lectrosonics SSM Micro Belt Pack Digital Hybrid Wireless audio for compandor-free digital quality. “The form factor of the SSM is really excellent for theatre work,” said Patridge. “It fits very well under a costume or wig without feeling bulky and is quite a bit smaller than what we have been using. It sounds really good and has great battery life. We paired those with Lectrosonics Venue 2 six-channel single rack receivers.”

The designers also used Clear-Com’s HelixNet intercom system for the first time. The system is one of the larger, if not the largest on Broadway. It’s fairly new to the Broadway market and allows for multiple channelisation over a single XLR. It does a lot of things that traditional partyline intercoms don’t do without going into digital intercom, which can be a more complicated and expensive set up.

“In addition to the HelixNet system, we also utilised Clear-Com’s FreeSpeak II digital wireless intercom system,” added Patridge. “It uses Wi-Fi type frequencies and operates in a different manner then we have been using, which is the standard UHF type Telex wireless intercom. It was not entirely risky because we had good reports before we put it on the show. There was a small learning curve, but we managed to push it to its limits. We used 16 – 20 wireless intercoms and it ended up working really well; everyone is very happy with it.”

Rounding out the sound package was a selection of microphones including DPA d:screet 4061s for the cast, and DPA d:dicate 4011s and Neumann TLM 102s for the orchestra. Paramour also marks the first time the designers have ever had to put a wireless microphone in a vacuum cleaner.

“Scott Kalata at Masque Sound continues to be a go-to person for us,” added Patridge. “He brings it all together in a big picture sense and we certainly call upon all of Masque Sound’s technical expertise when putting the show together. In addition, our Second Engineer Lucas Indelicato and longtime Production Engineer Kevin Kennedy both did an incredible job as did John Gibson, head of sound at the Lyric Theatre.”