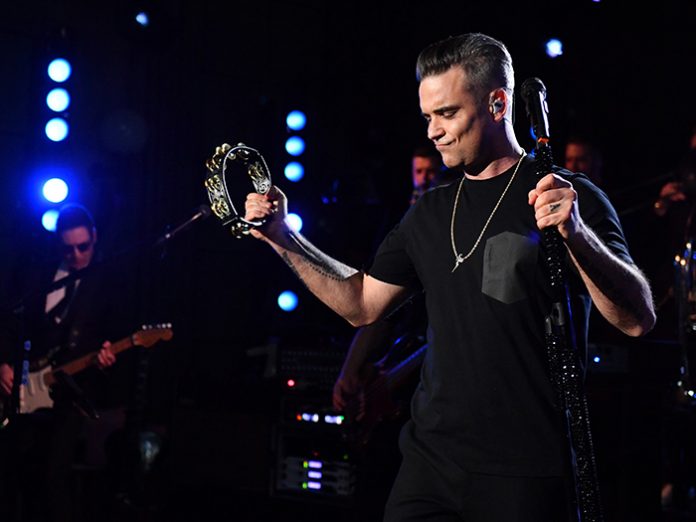 Mission specific discharge and LED moving lights from Martin by Harman featured widely on a number of television shows in the lead-up to the Christmas season. Many of these have been sourced from Nick Edwards’ new TV lighting rental company, Version 2. One of the most experienced adopters has been Stuart Pring, who recently lit Robbie Williams Radio 2 in Concert show and The Brits Critics Choice Awards, for Brit TV.

A veteran of Martin by Harman lighting solutions over the past 15 years, in recent times Pring has favoured the MAC Aura range, RUSH Par and MAC Viper, sourcing inventory from Edwards’ various companies along the way. He used another Martin by Harman all-in-one fixture, the Axiom Hybrid, for the Robbie Williams concert at Maida Vale’s MV3 studio.

“The small size of the studio was exacerbated by the large number of musicians,” he said. “I needed compact fixtures that could create beams to fill the small stage from a short throw. Since the truss was only 4m high, the fact that these lights were small also meant they were easier to place among the many band members as floor lights.”

To achieve his desired effect he requisitioned five Martin by Harman Axioms to be flown in the rig, five MH3 Beams on the floor with an Aura XB as backlight. “It worked well as a beam and a spot light as well as a great wash light when zoomed out and defocused,” Pring commented.

For the Brits Critics Choice Awards, Pring benefitted from having prior experience of working at Abbey Road Studios. His goal within the large space was to produce a design that would work for three bands each playing two numbers, with diversity in the lighting for each band. Using lighting largely for projection he deployed Martin by Harman RUSH Par and MAC Viper on the floor around the band, to project colour and animation gobos onto five Dedolight PanAura octagonal soft lights.

On each PanAura from the same distance he placed a MAC Viper. Pring explained: “By using a combination of rotating gobos, prism and full zoom I managed to fill the silks of the PanAura with gobo textures, and by playing with the focus I created abstract effects.”

Meanwhile, the MAC Aura XB’s were rigged on double wind-up stands as backlights for each of the band members.

The Axioms enabled Pring to offer beam lights as well as spots. He noted: “The Axioms gave me the ability to create strong gobo looks and by using the prism we could get very wide beams. By taking out the gobos we could also use these lights as wash lights.”