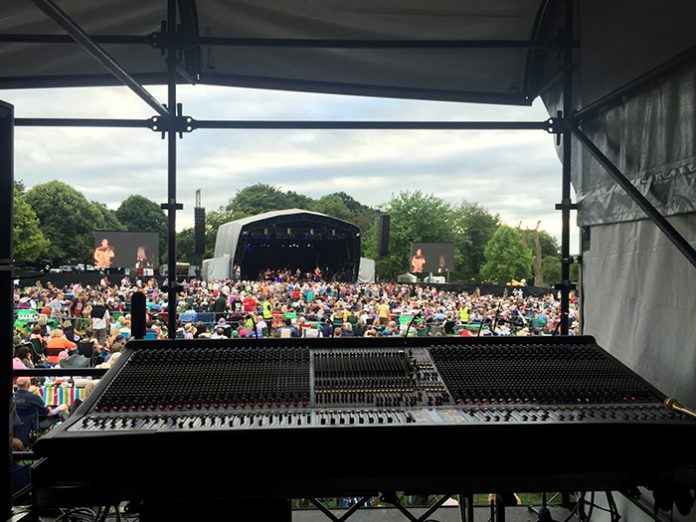 When Van Morrison headlined the 20th Anniversary Glastonbury Abbey Extravaganza – the annual event that traditionally follows the Glastonbury Festival – Martin Audio’s MLA Multi-cellular Loudspeaker Array was on hand, just as it had been at the main Pyramid stage six weeks earlier.

Responsible for the audio production was once again RG Jones Sound Engineering, who have a long-standing relationship with both events. Michael Eavis staged the very first Extravaganza in 1996, when Glastonbury Festival had a fallow year.

Set in the grounds of Glastonbury’s historic seventh century abbey, the challenges for the PA were as would be expected; off-site noise needed to be contained and sightlines preserved for the 10,000 who attended, in what is an unusually shaped location, with lake and trees.

With an experienced technical crew, including Project Engineer Jack Bowcher, System Tech Mark Edwards, plus Billy Birks and Stephan Krista, production rigged hangs of 14 MLA elements per side with six MLX subs on each stage wing. Delays consisted of eight MLA Compacts and three Martin Audio WLXs in cardioid pattern. Meanwhile, a DiGiCo SD11 digital console was provided at FOH, alongside a Midas H3000, and a Yamaha PM5D and DiGiCo SD11 desks were stationed in Monitor World.

While Enda Walsh mixed Van Morrison at FOH, also on the bill were singer/pianist Jamie Cullum and Wells Cathedral School Big Band, before the Extravaganza closed with the traditional fireworks display.