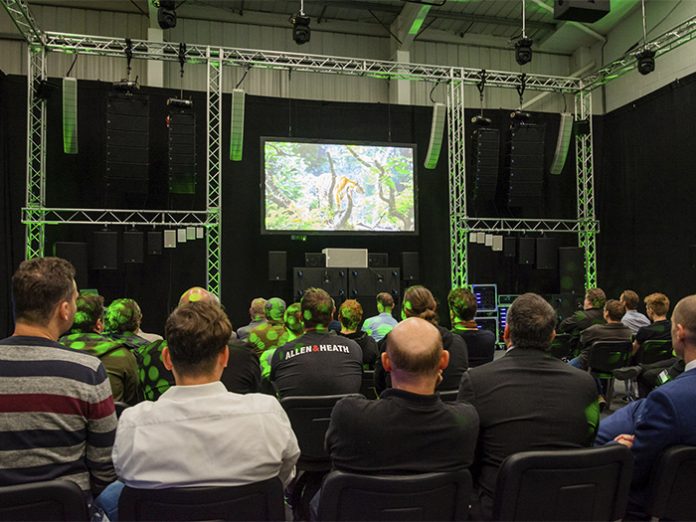 Martin Audio capitalised on its successful marketing formula by hosting three Open Days (split into 5 2-hour presentation sessions) at their HQ in High Wycombe, to coincide with this year’s PLASA Show in London.

“The timing was perfect,” said MD Dom Harter. “Not only were many of our partners and customers already in town but it gave us the perfect opportunity to showcase, and in some cases give world premieres to nine new products.”

With attendance breaking all records for this event, Harter himself kicked off proceedings, introducing all 4 models in the new high-performance VIA amplifier range — designed to partner all Martin Audio systems beneath the Wavefront Precision line arrays, and in particular the new ADORN series as well as CDD and O-Line.

Attendees didn’t have long to wait before sampling Martin Audio’s signature sound, in the shape of the ADORN on-wall speakers. “The market for commercial speakers is growing and is often served by poor sound,” Harter explained. “We thought it was time to enter this growing market, and offer a no compromise solution of affordability and audio quality.”

The ADORN 40 and ADORN 55 (respectively equipped with 4” and 5.5” drivers) were demonstrated, both with and without the new SX110 slim line single 10” subwoofer, much to the nodding appreciation of the audience, who could scarcely believe the power unleashed by such diminutive boxes.

Martin Audio Product Support Engineer, Robin Dibble, then took over, presenting CDD and CDD-LIVE. “With quarter of a million CDD enclosures now out in the field this is our most successful install range ever,” Dibble exclaimed.

Dibble then turned to the CDD-LIVE variant, explaining that the series came in tour grade enclosures, containing DSP and 2-channel power amps with VU-Net / Dante compatibility, making them networkable. The CDD-LIVE 8, CDD-LIVE 12 and CDD-LIVE 15 were demoed, both with and without the new hybrid SXH218 sub, which contains presets for cardioid configurations.

Next, visitors experienced the loudest manifestation yet as the TH Series model was run in combo with the SXH218 subwoofer. The biamped TH Series is a 3-way, full range, horn-loaded point source series ideal as a powerful live venue or club system.

The mic was handed back to Dom Harter who talked about optimising array technology. “Coverage, control and consistency to this level is something only Martin Audio can do, removing the trial and error approach,” he said. “Summation of sound at the audience plane is what we focus on.”

He then spoke at length about the latest development in optimisation — scalable resolution — and how Martin Audio’s Wavefront Precision and O-line series behaves with different box resolution and the commercial advantages. Visitors took time to hear scalable resolution in action, via O-Line, WPM and WPC demonstrations, with LF extension then boosted with the presence of SXH218 subwoofers.

“This is a fully immersive 3D audio environment with no panning gimmicks or Doppler effects, made possible by the SARA II rendering engine,” Dibble explained.

The demonstration theatre had been specially equipped with 6 overhead XD15 enclosures on the overhead truss, with CDD-LIVE 8’s in the surround and 4 arrays of O-Line on stage with SXH218 completing the audio environment, all Dante enabled.

Dibble showed how it was also possible to generate different room environments, changing the sound of the speakers to suit the application — effectively creating an artificial acoustic environment. This was effectively demonstrated by the sound of a plaintive sax that slowly became embroidered with 3D reverb and other room FX.

“Another key thing,”  Dibble continued, “is that we can bring a much wider stereo image and deliver it to more members of the audience.” This was demonstrated via 4 O-Line hangs across the front of the stage with the effect demonstrated with the impact of switching between 2 standard left right configurations and all 4. “The wide stereo image changes the whole perspective — in other words there are no longer any cheap seats.”

But  Dibble was not yet finished. Joined by Dom Harter, he explained that throughout they had been wearing a device called Stagetracker II — which offers the possibilities of precise, multi-dimensional positioning. “It enables you to track over 100 cast members and position sound accordingly within the venue, for a truer visual and audio experience.”

He and Harter then formed a tag team, with both representatives constantly tracked from left to right, before switching off Stagetracker to highlight how their individual audio was then completely removed from their current position.