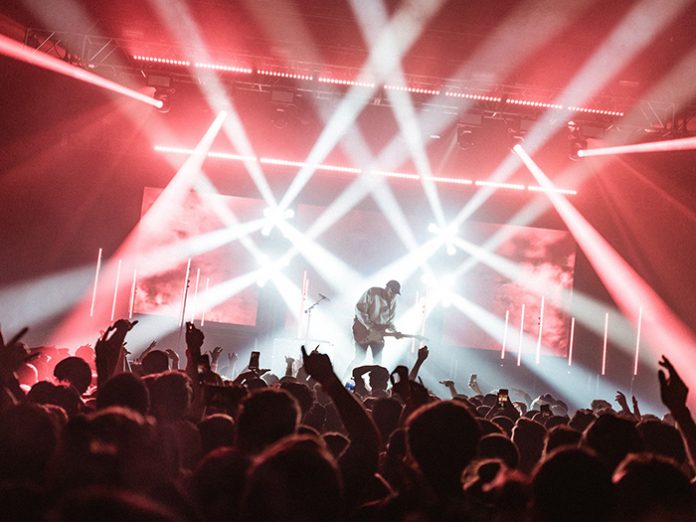 Reflecting electronic artists San Holo’s heartfelt sound in light and video is a 13-universe Manuel Rodrigues-designed show, powered by a ChamSys MagicQ MQ80 desk and video server. Like the music of San Holo, which, though seemingly elemental, weaves diverse elements together into a uniquely moving sound, the album 1 tour lightshow is complex and intricately varied in its “simplicity.”

For Rodrigues, who worked with the tour’s Creative Director Thorwald van den Akker, this tightly focused approach is consistent with his design philosophy.  “In my designs I always try to go to the essence of the looks I want to create,” he explained. “I’m very rigorous in applying the ‘less is more’ principle. I try to find the simplest lines and then line up every lighting and video element perfectly with each other. The CAD drawing I made might look boring to the untrained eye; everything is just in rows of the same fixtures, and all elements are lined up with each other. But when the light and video work in concert, their aesthetics become more apparent because of the clean design of the stage.”

The validity of Rodrigues’ statement is  beautifully apparent to anyone who’s seen the 73 luminaires and 75 video panels in his rig work in harmony on the tour. Covering the stage with a matrix of intricately balanced beams of light, moving from brilliant colors to cool bright whites, and  accenting the artist with evocative side lighting, his lightshow reflects the passion and eclectic nature of his client’s musical performance without ever seeming intrusive or overbearing.

The video content, created by Bob Jacobs, also reflects the emotional tenor of the show, while paying homage to its retro quality. “Bob did a beautiful job,” said Rodrigues. “We evoke a sense of timelessness by shooting a lot of the video on old VHS cameras. San Holo likes to use a tape delay to give his sound extra layers of depth, and by using video cameras we tried to emulate the same feel. Often, this video content is then pixel mapped and used to drive the LED fixtures.”

The ChamSys MQ80 has been instrumental in helping Rodrigues achieve his vision on the global tour. “My console’s portability, number of universes supported, and the ability to capture palettes over Art-Net have been very important to me,” he said.  “These three functions combined are golden for a traveling LD.  I think ChamSys initiated a trend years ago of shrinking down the size of the lighting desk, and in the process has tempted other lighting desk manufacturers to release products with a similar form factor. The number of universes supported by the MQ80 is just insane for the price.  I have amazed many house LDs by copying their positions from their desks using Art-Net input.”

Rodrigues’ show on the tour is almost entirely synced. “The only thing happening live in this tour is setting FX speed / size and the front light for San,” he said . “I want to have as little front as possible, and therefore I make as small as possible light regions for San to step into — and I only turn them on when needed. The rest of the show is synced using M2Q. The bridge between Ableton and ChamSys enables the designer to use MIDI to draw light sequences. This information is then translated into the ChamSys Remote Protocol. San uses Ableton to play back his music, and I put my lighting MIDI sequences in this same Ableton set. This way synchronicity is ensured, and San still has all the creative freedom possible by default from within Ableton.”

During the time he was putting the show together, Rodrigues enjoyed a smooth open flow of communication with his client. “I was very happy with the input of San during the rehearsal process,” he said. “His ideas tended to be spot on. This all enabled us to have a very successful premiere of the show in St. Petersburg, Florida.”

The collaborative relationship between San Holo and Rodrigues can be traced back to their initial meeting more than a year before the designer began working on the tour.  San Holo’s manager Budi Voogt introduced the two of them at the Eye Film Museum in Amsterdam. “I immediately felt connected emotionally to San and his approach to his work,” said Rodrigues.