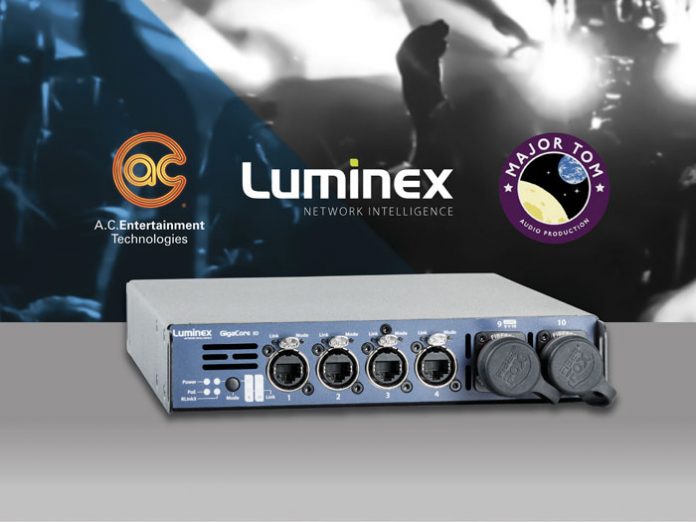 With offices in the UK and USA, Major Tom has over 50 years of experience supplying some of the world’s leading international concert tours and events.

When it came to investing in network switches to work with its large inventory of Meyer Sound line arrays, it was important for Major Tom to go with a solution which was widely adopted, as well as being compatible with the new Milan AVB standard.

Major Tom project manager, Andy Banks commented: “With Meyer Sound’s equipment supporting Milan AVB, it was absolutely vital that our choice of switch was also compatible with this, to benefit from the seamless interoperability between devices.

He added: “In addition to being compliant, with the Luminex GigaCores doing a VLAN so simply, we realised that this was a product we really needed in our inventory!”

Major Tom purchased the Luminex GigaCore 10 rack-mountable switches with Fiberfox fibre connectors, to use with its large existing fibre cabling inventory for running over long distances.

Engineer, Dennie Miller is sending Milan AVB control from a Meyer Galileo Galaxy networked loudspeaker processor at FOH to the system control rack, which is on a long-distance fibre loop with the two main stage racks containing five Galaxy processors each side of the stage. There are a further two processors behind FOH for delays in some of the larger venues. The GigaCore 10s have also been utilised to deliver DJ Net software control for Calvin Harris’ CDJ set-up during various shows over the summer, as well as several other high-profile live events.

After purchasing the GigaCores, several of Major Tom’s technical team attended one of AC-ET’s free Luminex training events, which are held at the company’s Northern and Southern UK offices.

Summarising his experience using the GigaCores, Andy commented: “The Luminex switches are totally reliable, very rugged for touring, and simple to use. We love them! The ease of set-up with the Luminex Groups is amazing compared to other AVB-compliant switches we’ve tried. We are looking to make this Meyer touring system one of our standard PA systems now, so most things we do will have GigaCores on!”