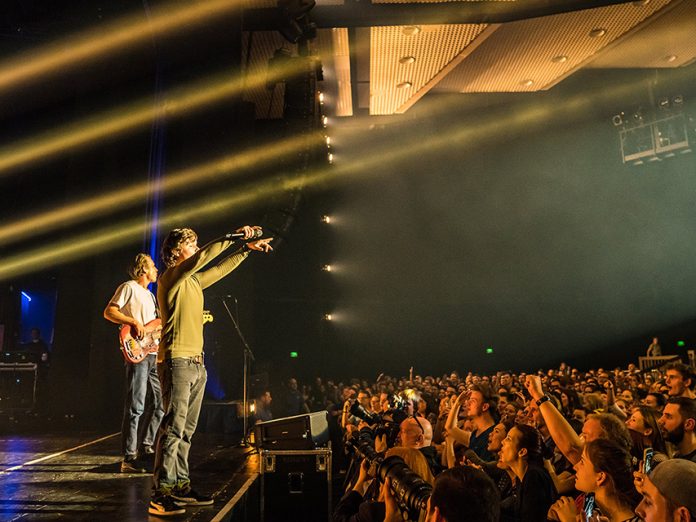 Led by engaging frontman Lukas Forchammer, the Danish pop/soul group Lukas Graham has vaulted from small club gigs to arena touring in less than two years, along the way garnering three Grammy nominations for their global hit, “7 Years.” On their current European tour, the band is packing large halls and small to mid-sized arenas while thrilling fans with funky danceable tunes – usually abetted by a brass section – and the emotional urgency of Forchammer’s introspective song writing.

Delivering that potent mix of intimacy and impact is the responsibility of Frank Grønbæk, the band’s FOH engineer since late in 2012. For Grønbæk, the key to crafting a successful set is giving each vocal and instrument its own space and weight in the mix.

“One of the things I like about mixing this band is that there are relatively few source signals, so you can build space around the sounds rather than cramping things down because you need to hear a lot of things all at once,” he observed. “There’s room in there so you can actually have every instrument fill up space, and that’s really nice.”

“When I first heard the band on a Meyer LEO Family system about three years ago, I realised there is a difference between what you can hear on that system and all others available on the Danish market,” he recalled. “Every detail, in every frequency band, was precise and defined. When you added something like 250 Hertz on EQ, it actually came right out in the mix, instead of being like a smudge. You really could hear, ‘Okay, whoa, that’s what I’m doing!’ And that’s super helpful.”

“What I enjoy about mixing on the LEO Family systems is that what I put into the system is exactly what I get back out,” continued Grønbæk. “Everything is clear, across the full frequency spectrum, and I appreciate that in acts like Lukas Graham where the vocal is extremely important. That’s why whenever we play venues that don’t have house systems; I try to get Meyer Sound. It makes a huge difference for me.”

Lukas Graham’s latest European tour, launched on February 25 in Dublin and wrapping up on April 12 in Lisbon, will cover 25 cities in 13 countries.