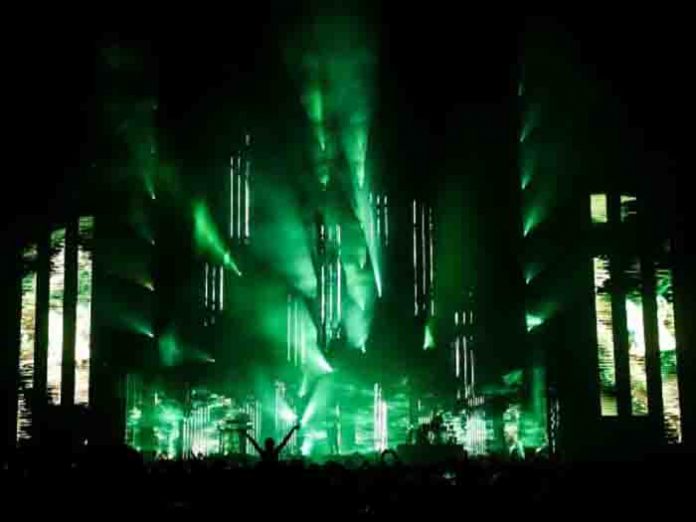 Liteup Events recently supported alt-J, at their first arena show of 2017 at London’s The O2 Arena, as part of the venue’s 10th year celebrations as one of the world’s leading live music and event destinations. The arena show comes at the beginning of alt-J’s current worldwide tour, which also saw them headline The Other Stage at Glastonbury this year.

For the festival shows, which make up the bulk of alt-J’s touring this summer, Liteup is supplying 84 GLP X4 Bar 20, 18 Claypaky Mythos2, 3 Robe BMFL Wash Beam and 22 SGM P5 LED wash light. Demonstrating their problem-solving approach, Liteup collaborated with WonderWorks, Brilliant Stages and FragmentNine to devise a custom dolly solution to get nearly 250 fixtures and a 60-inch wrap around video screen on stage in 10 minutes.

“The detail of a show’s production is integral to making the tour work smoothly and successfully, so going above and beyond makes a big difference,” said Marc Callaghan, cofounder of the company alongside partner Kris Box. “For example, when alt-J played at Rock Werchter festival, trying to get the production floor package in, with The Foo Fighters headlining after, needed a lot of thinking about. Hence, we helped to design the dollies and worked with everyone the whole way through from beginning to end, rather than just being an equipment rental company.”

Videowise, the floor package is rounded out by 42 ROE Vanish 25 and 150 Martin VDO Sceptron 10mm pixel pitch LED screen modules. “The Mythos2 units provided the core element of the show, along with the GLP X4 Bar 20 LED battens,” said Callaghan. “For the floor package the X4 20 bars and Mythos2 are mounted behind the ROE Vanish 25mm LED screen, so required custom fixings to get the profile low enough to mount them.”

The show is controlled via two GrandMA Lite consoles, with DMX distribution over a Luminex fibre optic system via Art-Net and five GrandMA NPUs. The content is handled by two d3 Technologies 2x4pro media servers, operated by Dan Bond, all supplied by Liteup.

About equipment choice, Callaghan said: “We want to invest in equipment that is reliable and effective to give the most to our clients. We work closely with the manufacturers to build good relationships, and to ensure our staff are fully trained in maintaining and operating the equipment, so we can be sure that every show gets equipment in its optimum working condition. All the equipment manufacturers have been outstanding throughout.”

Liteup is based in Portsmouth and specialises in live music and event production. Over the years it has worked with clients such as Electric Fly Productions, Nickelodeon, NBC, Reef, The Levellers, FragmentNine and MTV.

“For alt-J we are an active part of the touring crew as well as the production hire specialist,” said Callaghan. “Because of this, there is an extra level of care and connection to the shows we work on.” he concluded.