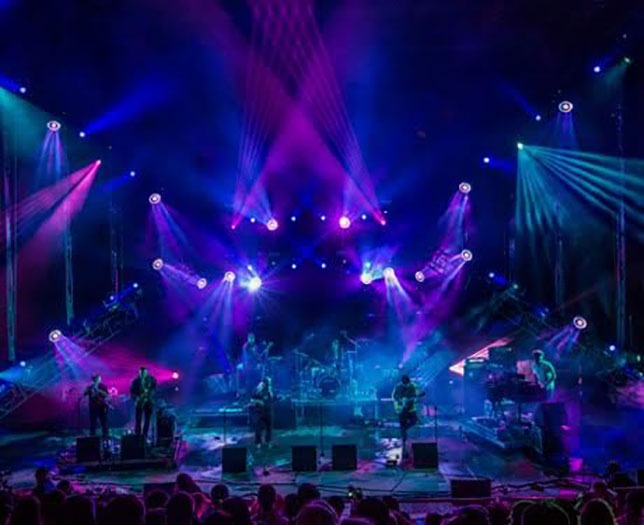 When it comes to naming albums, Lettuce is a band of few words. Following the success of its two previous releases, “Rage!” and “Fly,” the group came out with its latest record “Crush” in November 2015. Living up to its mononymous moniker, “Crush” is a pile driver of thunderously crushing grooves.

Since its release, the album has barrelled all the way to the top of the US Jazz Albums charts. The recent Crush Tour delivers the big sound associated with its namesake album. It’s a sound made all the more powerful on stage by an appropriately potent lightshow by production designer Gabe Fraboni and lighting designer Wiley Cutler, using a collection of Rogue fixtures from CHhauvet Professional, provided by 4Wall Entertainment.

“We were using another big name moving head, but the people at 4Wall showed us the Rogue Series,” said Fraboni. “The Rogues impressed us with their compact, size, brightness and optics. The fixtures fit our touring needs perfectly.”

Fraboni and Cutler put together a rig that was anchored by six Rogue R2 Spot fixtures and six Rogue R1 Washes. The R2 Spots were positioned on top of four 10’ sticks of upstage truss. An additional pair of the R2 Spot fixtures were arranged on cases that were either next to the truss sticks or by the drum stand in the centre of the stage, depending on the shape and size of the performance area.

The Rogue R1 Washes were sometimes clamped on the sides of the truss below the spots. At other times, depending on the venue, they were arranged on the downstage edge of the stage to alternate between washing either the band or audience in vivid colours.

“On a tour like this, where we are playing in theatres and clubs of very different sizes, I like to arrange lights differently to adapt to the situation,” said Cutler. “The general idea behind the design stays the same, but depending on the stage or the house light rig we have at our disposal, we have to change things up a bit.”

However, regardless of variations in the venue, there were performance parameters that absolutely had to be met wherever Lettuce played for the band’s lightshow to maintain its signature look, according to Cutler. High on that must-have list was the ability to wash the stage in rich colours.

“We always need downstage colour wash,” said the LD. “We may change where the lights are hung or placed, but being able to wash the band in all different colours — specifically dark blues and reds and also in true white– is important to my show for Lettuce. In venues where colour washes weren’t available I zoomed out the R1 washes on the band as a wash from the downstage edge.”

Cutler, who controlled the rig using an Avolites Titan Mobile, created a variety of looks for Lettuce. This versatility is most definitely needed, as Lettuce has a remarkable ability to try on and discard different musical coats with the nonchalant ease of a wardrobe diva, all without ever losing the smooth, tight seamless give-and-take connection between members of the band.

“The show ranges quite a bit from big pretty stagnant scenes to fast-moving hard-hitting strobe sequences to reflect the music,” added Fraboni. “Some songs are queue stacked. Having lights that are versatile enough to be used for different effects is nice. Aside from the versatility of the Rogues, I also like their efficiency, because even with power distribution there still is a venue or two a tour without tie-ins. In those cases, LED fixtures save the day with their low power consumption. Rogues are so efficient, we can go into a room that has only a single phase and act like it has three phases.”

Feedback on the lightshow was very positive during the Crush Tour, according to Cutler. “The lights really played off very well against the band and the audience,” he said. “Everyone liked the way our show looked, so we were very happy about that.”