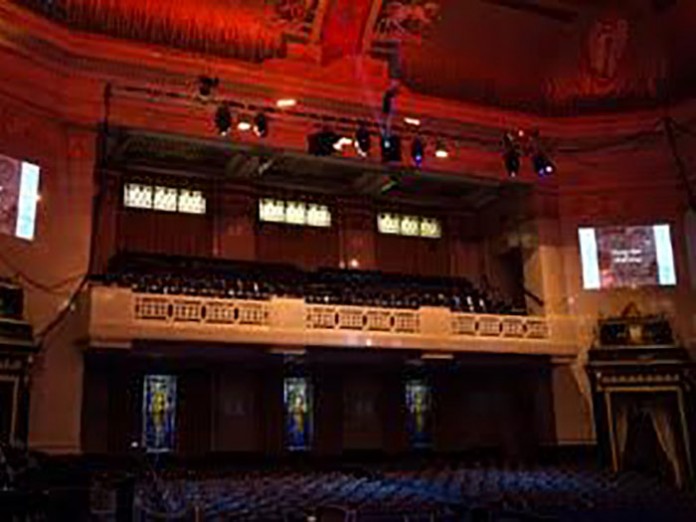 Following on from last year’s highly acclaimed event, Letters Live returned to the Freemason’s Hall in Central London in mid March for its second run of shows. Letters Live celebrates the art of letter-writing, and features a variety of well known actors, personalities and performers, reading interesting and significant correspondence, both modern, and from history.

This year’s shows supported a number of literacy charities and organisations including First Story, as well as providing some much needed profile for Help Refugees UK, which supports people fleeing from conflict in their home countries.For the show production, PRG XL Video worked with production consultancy NP+Co, and their creative director Nigel Peters, and production manager Kahren Williams, to supply high brightness video projection inside the historic Freemason’s Hall.

The intricately decorated building presents some challenges in terms of suitable surfaces for projection, but the production team decided that four separate ‘screens’ would be created using the flat marble walls at each corner of the great hall. Using four of their Barco HDF-W14 units rigged on truss either side of the hall, they projected on to the opposite walls, with content displaying the Letters Live logo before the show. During the performances, the content gave information on the performers, and about the letters being read.

Jay Mobbs-Beal, Account Manager, PRG XL Video commented: “It’s great to work with Kahren and her team on the Letters Live event for the second year. It’s an unusual event, but one which is growing in popularity. The venue is quite unusual, but the projection worked well in its location, and we increased the brightness this year to ensure the visual content had great colour and clarity.”

Nigel Peters summed up: “PRG XL’s outstanding team, no nonsense advice, and decent rates on state-of-the-art equipment made beautiful crisp work of the image projection at Letters Live. Here’s to the future of letters, and Letters Live!”