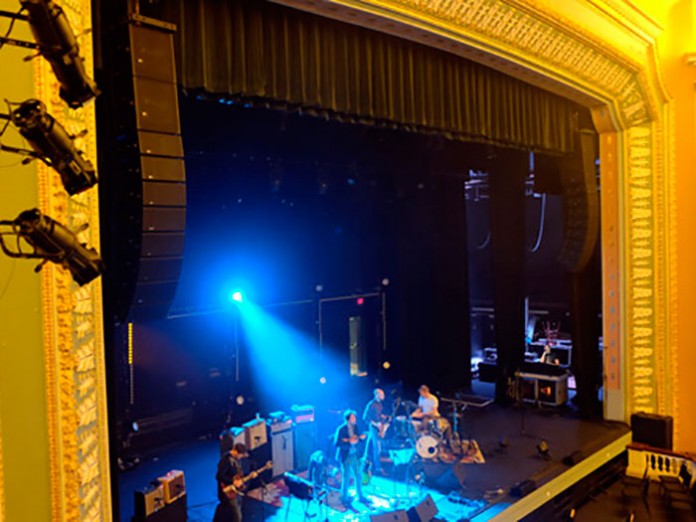 For the second year in a row, Georgia’s Savannah Music Festival is an all-Meyer Sound event, with sound systems reinforcing all five venues for amplified music. With more than 100 performances scheduled through April 9, this year marks the debut of Meyer Sound’s Leopard linear sound reinforcement system at the festival, providing sound at the Lucas Theatre for the Arts.

Leopard was specified for the venue by Chris Evans, the festival’s chief sound engineer. “Leopard really shined for the Pink Martini show,” reported Evans. “The band is very dynamic, with pin-drop-quiet classical piano and violin sections followed by upbeat big band parts. I noticed the detail did not change with the loudness level. This is what sets Leopard apart—that ability to maintain clarity and musicality from the softest to the most intense parts of a show.

“During the Irish supergroup The Gloaming’s performance, the first thing I noticed was the level of detail during the softer passages,” continued Evans. “The FOH engineer for the band told me that he didn’t have to use as much EQ to get the results he wanted compared to other systems.”

The festival’s growing reliance on Meyer Sound has paralleled with its mushrooming growth. One Meyer Sound system was used in 2010, and the number has advanced steadily to include all four venues in 2015, with a fifth added this year.

“We present an extraordinarily wide range of musical genres, and with Meyer Sound we’ve found that we don’t have any limitations whatsoever,” noted Ryan McMaken, the festival’s marketing and managing director. “Also, when we advance the shows, as soon as artists find out it’s a Meyer system, they’re happy with it.”

Other Meyer Sound equipment in use includes UPJ-1P and UPJunior VariO loudspeakers, UPM-1P loudspeakers, 700-HP subwoofers, and Galileo Callisto loudspeaker management systems with Galileo Callisto 616 array and Galileo 616 processors. MJF-212A and UM-1P stage monitors are deployed across the five venues. As in prior years, all systems are provided by Rock N Road Audio of Tucker, with facilitation by Roy Drukenmiller and Robin Gang.

Launched in 1989 and assuming its current name in 2002, the Savannah Music Festival is the largest musical arts event in Georgia. Other notable acts performing in 2016 include Dwight Yoakam, Dave Rawlings Machine, Vicente Amigo, Drive-By Truckers, and Rokia Traore.