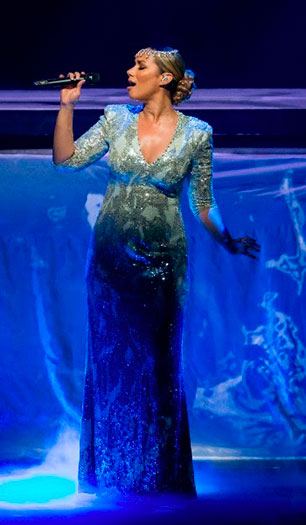 A decade after winning The X Factor, Leona Lewis is still one of its most recognisable alumni. Early 2016 saw her undertake a 14 date UK tour to promote her latest album, I Am, with a K-array Firenze system making its British touring debut.

Distributed in the UK by 2B Heard, K-array loudspeakers have rapidly become a ‘go to’ solution for a wide range of situations where high quality sound is needed from low aesthetic profile sources. The Firenze digitally steerable touring system marries K-array’s Slim Array Technology with rugged, weather-resistant enclosures to bring the best of the company’s audio technology to theatres, arenas and stadiums. The tour took in theatre-sized venues throughout England, Scotland and Wales, including two nights at the London Palladium. 2B Heard supplied a Firenze system comprising six KH8 panels and three KS8 subs per side for the main system, plus two KH7 per side for in/out fills and four KP102 for front fills.

The full system was deployed in each venue, with EASE FOCUS 3 used to draw the space and create a virtual system. From there the audio team, headed by Front of House engineer Dave Wooster, generated the splay angles and FIR filters that the system needed and were automatically transferred to the Powersoft Armonia DSP system contained within all the KH units.

“The process was seamless every day and never needed to be done twice on the whole tour. The prediction and realisation were so close that we didn’t need to change anything,” said Wooster. “The physical rigging of the system was incredibly quick, on a good day with easy access the whole system was in in under 30 minutes. From having the motor hanging to the main system being off the floor took less than eight minutes on average, while both sides of the ground stacked elements were on the floor and done in under 12 minutes – both with just one technician rigging the system. The was also a considerable advantage with rigging a physically straight system in some of the trickier rooms – there was no need to try and squeeze a J-shaped array around obstacles or run the risk of injuring crew with boxes coming together.”

The frequency of the main flown system extended down to around 65Hz, so the subs were run in INFRA mode, with one of the three each side in a cardioid arrangement. This significantly extended the low end while ensuring the front rows weren’t drowning in bass frequencies. And, thanks to the KH7 and KH8 having the same sonic signature, the sound throughout the venues was seamless.

“Once all units were tested and aligned via SMART, only one walk test was performed during the day as the coverage from the front to the back was absolute, with almost no difference in frequency response and dynamic performance,” Wooster said. “For the first time ever I can honestly say that I had no fears about the mix sounding any different from the front to the back. And the horizontal coverage across the room from the 120º KH8 boxes was excellent, even in some of the trickier venues with close walls and balcony seats near to the system. The benefits of Firenze being a true line array were very evident in these situations.”

“The EASE Focus prediction took very little time to create each day of the tour,” confirmed Toby Donovan, system technician for the tour. “The angles were applied to the system, which was then flown and completed very quickly. Being able to rig and fly the system dead straight proved to be a real time saver. The uploading process of the FIR filters from EASE into ARMONIA was seamless and very straight forward. With a short alignment and equalisation using SMAART we were done. Walk tests proved that the coverage predicted in EASE was what we actually achieved.”

“I had very little time on the desk before production rehearsals and it was without doubt the fastest I have ever been able to get a mix to a workable situation that could then be developed very quickly into a show,” said Wooster. “The vocal always sat firmly in the front of the mix, due to the dynamic response of the system. It allowed me to create a full mix around the vocal, with the exceptional high end response and ultra deep low frequencies delivering an excellent finished product.”

“The fact is that it afforded me massive amounts of headroom and never felt close to any limits. The subs provide frequencies that wrap you in LF and the stereo image is excellent, with the smallest of adjustment being fully represented from console to speakers. Indeed, one of the great touches on the SSL L500 is the Width control on all stereo sources, which really helps to allow daily adjustment for wide and narrow venues.

“Overall the system was outstanding, with great reliability and incredibly easy setup. What more can an engineer or show want?”