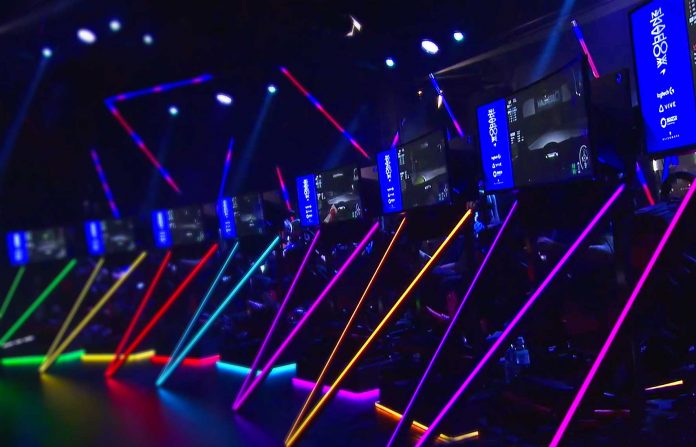 Working with Production Company Attention Seekers, LED Creative provided a selection of products from their exclusive Sigma LED range to help build the clean, modern look created for the semi-final of the McLaren Shadow Project.

Staged at the prestigious McLaren Technology Centre and streamed live via the project’s YouTube Channel, the event is a highly contested battle for a place on the McLaren E-Sports Team. Having been whittled down from over half a million applicants, the final eight ‘virtual drivers’ were tested over a series of racing challenges, competing at legendary tracks in iconic McLaren machinery.

The linear theme is continued across the set with additional Pulse Wands placed adjacent to the commentary box located behind the drivers. Working in unison with the Sigma 60 and Pulse Wands, LC BYTE system allows precision ‘real-time’ management over colour, movement and intensity, perfect for providing maximum artistic control in a live broadcast environment.

With just three competitors graduating through to the grand final, the McLaren Shadow Project reaches its conclusion with another live stream in January 2019, with the victor joining the company’s E-Sports Team. Viewers can catch all of the action live on YouTube.

Commenting on the project, LED Creative Project Manager Tim Rees said: “This is a really exciting live production to be involved with. McLaren are at the forefront of racing technology and it is important that the set design reflects this. The team have done a fantastic job, using our Sigma products to great effect both as scenic elements and for adding accents to the installation.”