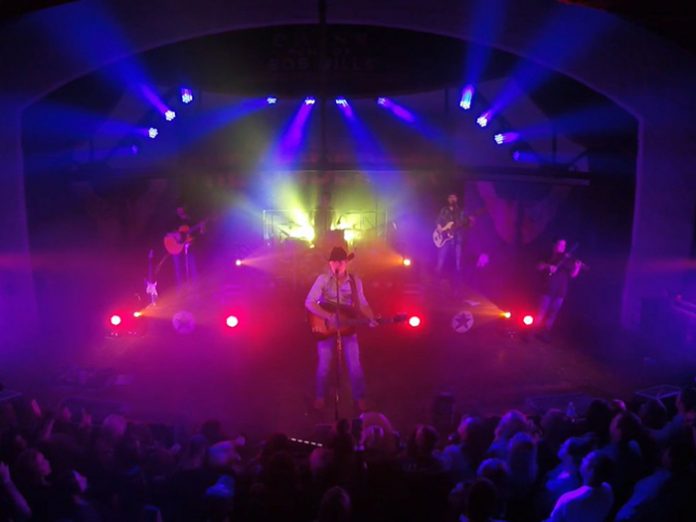 In keeping with their basic sensibilities, the band is traveling in a single trailer while touring in support of their hit record The Underdog. Packed on board are a collection of Rogue R1 Wash and R1 Spot fixtures from Chauvet Professional, supplied by 4Wall Entertainment Lighting.

Road worthiness is an extremely important quality for any fixture used in the Aaron Watson band’s rig. Following the success of The Underdog, the group did 148 shows throughout the US last year. Meitzner was brought in to enhance the production value of the band’s live shows, which have been drawing large and enthusiastic crowds.

“The band had been running most of the floor package through a PC-based system that the Monitor Engineer/Stage Manager, Jared Miller, would run during the show,” recalled Meitzner. “They wanted to start having the house rig and floor package work cohesively instead of as two separate entities. We knew immediately that the Rogue fixtures were what we wanted to develop the tour floor package around. They had the right output to size ratio. Being in one trailer, we had to make sure that each fixture we selected was what we really wanted.”

Meitzner uses the rich intense colors of the Rogue fixtures to create a warm engaging aura around the band, so the light not only touches the audience, but also changes easily to reflect the wide range of moods embodied in Aaron Watson’s music. “We position four Rogue R1 Washes and the four R1 Spots in a semi-circle around the band,” he said. “This allows me to create a really good wash around the artist with texture and colors.”

“We use the Hex 7 and Hex 12 fixtures to highlight our four set pieces and backdrops,” said Meitzner. “There is really nice color mixing on these fixtures. The Battens give us side lighting around Aaron and the band, so the stage presentation really pops. I’m also getting the punchy beams of the R1 Washes, while still being able to zoom them out to a very nice wash depending on the music at any particular moment.”

The emotional power of Meitzner’s design was on full display recently at the band’s performance at the legendary Cain’s Ballroom in Tulsa. Ranked among the top 30 club venues for ticket sales by Pollstar, this historic venue, which traces its roots back to 1924, is famous for hosting big acts from a variety of musical genres on an intimate stage.  The Aaron Watson lighting rig accentuated this sense of intimacy by saturating the stage and much of the audience area in vivid color patterns.

Looks like this have impressed a lot of people, including Aaron Watson’s production manager Jared Miller, who said, “Using Erich and the new Chauvet fixtures have really pushed our production to the next level. I know that no matter what venue or festival we go into, he can use these fixtures and make the show look amazing.”