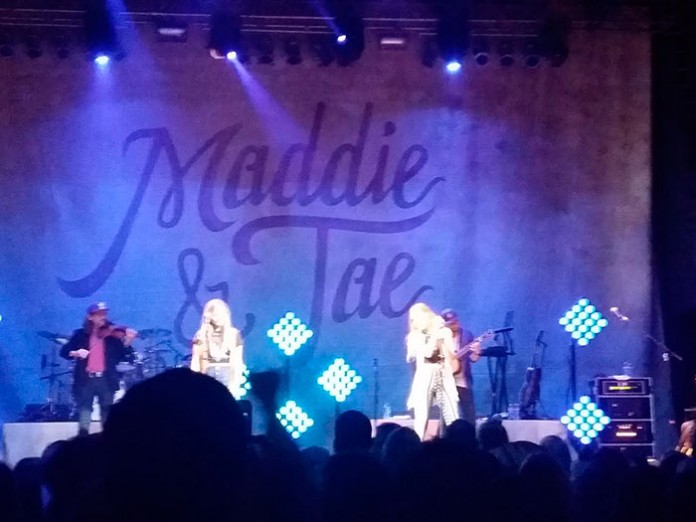 Aside from being blessed with huge helpings of musical talent, Madison Marlow and Taylor Dye, better known as the chart-topping country act Maddie & Tae, are also incredibly resourceful. The same knack for making things happen was exhibited by lighting designer Larry Foote, who created a dynamic and versatile rig for the duo’s Life Of Our Years Tour with Lee Brice, using only a single fixture: the Nexus 4×4 COB LED panel from Chauvet Professional.

“This is Maddie & Tae’s first shot at bringing their own lighting with them out on the road,” said Foote, who used eight Nexus 4×4 panels provided by 4Wall Entertainment Lighting. “Maddie & Tae got off to a very fast start, but they’re still very new, so the touring details haven’t caught up yet. I wanted Nexus, because I needed a rig that could fit into a single trailer. More importantly though, I was looking for something that could create a lot of different looks, as well as something that would play well with the house lights at the different venues on the tour.”

Foote positioned the Nexus panels on upstage pipe and base stands. “I wanted a rig that could shrink and expand depending on the venue, so pipe and bases were perfect,” he explained. The LD grouped six of the panels in pairs – three on either side of centre stage – and mounted two individually on stands in the middle. The panels were arranged in diamond shapes to create a more distinctive look on stage.

The flexibility that the Nexus 4×4 offers, allowing users to control each cell individually, was instrumental in allowing Foote to create the range of looks he was after. With his rig consisting of Nexus panels exclusively, he built his show by lighting individual cells on each fixture in different configurations to create a wide variety of patterns.

“Being able to control each cell’s intensity and colour was great since I was able to bitmap the fixtures,” said Foote. “Obviously the audience can see the panels as a whole, so revealing their full capabilities and individual cell control was something I used to build the show. There are endless possibilities you can create to give your rig a new look by illuminating only specific cells on the Nexus panels.

“Unfortunately, we could not supply a media server for the tour, but that is where the MA2 bitmapping came into play,” continued Foote. “I have a collection of .bmps and .gifs that I have collected over the last few years, and I threw these on the panels. This played a big role in the building of the show and giving me another way to make the rig stand out.”

With their reflective housing, intense output and rich colours, Nexus panels work well with other fixtures. In recognition of this, Foote programmed his Nexus rig to work with a variety of house lights that could possibly be encountered on the Maddie & Tae tour. “Shining gobos on these panels from the front can give you a really cool look as well as add another dimension to the fixture,” he said. “I programmed the show in pre-vis with various spots, washes, and LED fixtures so that the touring director could easily clone and get some more use out of the rig. Even in venues where you had only house pars or only front wash, you could still get really good looks by working them with the Nexus.”

Foote put a master fader on his console for the Nexus panels and ran them at 10%-20% brightness. This allowed him to pump up the visual excitement at key points in the show without overwhelming the audience in the front rows.

“This has really been an enjoyable project for me,” said Foote. “It demonstrates how much you can do with a fixture when you tap into its performance features. Plus, it’s given me a chance to work with some great people like Jennifer Moore and Cathie Lloyd at 4Wall and lighting director Austin Grundberg of Extreme Lighting & Sound, who is out there on the road executing the show every-night.”

For their part, Maddie & Tae are on a roll as they enter their second full year in the recording and touring business. They followed up their debut single, “Girl in a Country Song,” with another Top 10 hit, “Fly.” Their newest release, “Shut Up and Fish,” seems on its way to reaching equally lofty heights. It’s a safe bet that before long, this talented duo will be performing at large arenas. When they do, they will be very well served if their lighting rig is as impactful as the one that Larry Foote created for them using the Nexus 4×4 LED panel.