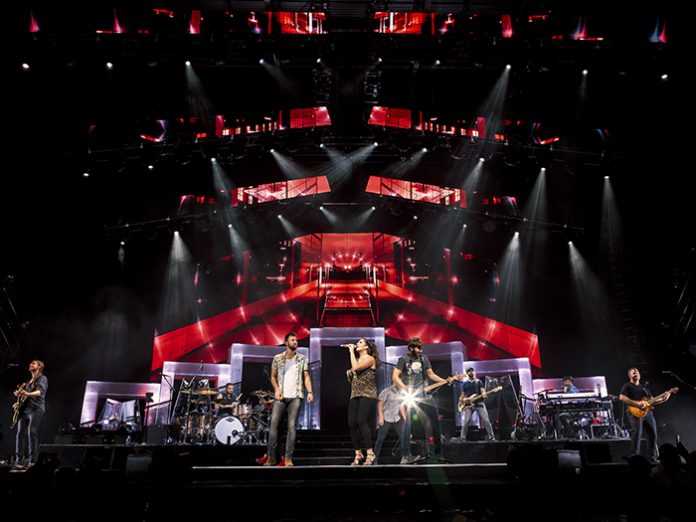 Country trio Lady Antebellum is spanning the globe on their You Look Good World Tour of arenas and amphitheaters accompanied by Claypaky Mythos2 fixtures and grandMA2 consoles.

The multi-Grammy winners just released Heart Break, their seventh studio album. The You Look Good World Tour commenced in Bakersfield, California in May, crosses North America this summer and makes stops in Europe and South Africa before wrapping in October.

“The top portion of the boxes is frosted and the bottom is clear,” said Routhier. “When you look at the set as a whole from front there appears to be a shallow ‘A’ shape. There are also mirror pieces in an ‘A’ shape that pop into the square archways of the set.”

She explained: “The combination of modern materials required a fixture that was able to wash the set in colour as well as bounce beams off of mirror for various effects. The Mythos2 was the perfect fit for this purpose. We were able to get some amazing laser beam effects while also saturating the set in light.”

The fixtures are placed at the base of every support column shooting up at the boxy plexiglass supports. There is also a line of Mythos2 directly behind the band.

Programmer and Associate Lighting Designer Andre Petrus created “an incredible bounce effect for the fixtures at the top of the encore segment of the show” during an epic rendition of Phil Collins’s “In the Air Tonight,” said Routhier. “As the artists are coming out onto the stage each massive drum hit is accented by bounce light from the Mythos on the mirrors. It’s the only time in the show that the particular effect is used.”

Touring Lighting Director Brent Maxon reported that the Mythos2 “have been holding up on the road really well; they perform great every night.”

Routhier and Long consider Mythos2 part of their toolbox these days. “We love the versatility and size of the fixtures,” noted Long. “They have been used on all sorts of different size designs in the past several years. The optics in the fixture are incredible and allow us to create multiple different looks using the beam/spot mode as well as the frost.”

Maxon is traveling with two full-size grandMA2 consoles along with six NPUs, four active and two spare. “Everything but automation is fired from the console, and it handles it seamlessly,” said Maxon. “I’ve been a big fan since I have started using grandMA, and it is the only console I want to use anymore.”