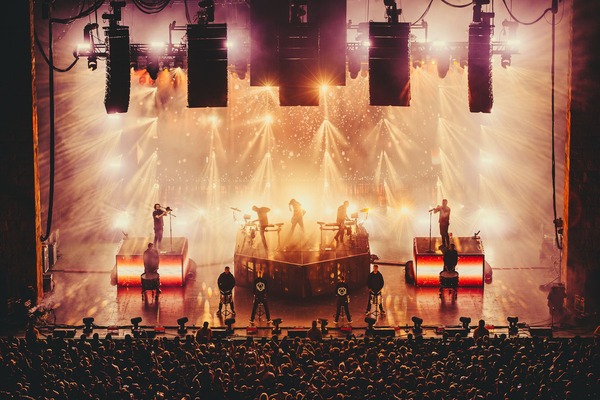 The sound system, provided by Clearwing Productions, was the first North American deployment of L-Acoustics’ L-ISA Live system. The performance also represented the first global use of the groundbreaking new immersive audio system on a major electronic act.

L-ISA, which stands for Immersive Sound Art, is a breakthrough in immersive audio technology, combining the manufacturer’s industry-leading sound design and world-class loudspeaker systems with sophisticated processing tools to create a hyperrealistic soundscape at live shows.

ODESZA FOH Engineer Patrick Hutchinson, said: “Using the L-ISA processor was a seamless transition from the traditional systems. Once all the MADI outputs were patched into the L-ISA processor, mixing became a natural environment in which each channel represented its own space within the mix. Suddenly placement of the instruments became more life like resulting in an immersive matrix of sound, which I have never experienced before. In addition to the immersive sound, I noticed that all of the instrument nuances finally started to present themselves much clearer than ever before. This in return allowed for the entire mix to translate the artists’ emotion while becoming fully immersive and containing tremendous amounts of depth and clarity. Great work L-Acoustics!”

According to L-Acoustics Application Engineer, Touring Liaison David Brooks, the choice to use L-ISA was ultimately artist-driven. “Given the size and layout of the Santa Barbara Bowl, we knew that it would be an ideal venue for L-ISA. We introduced Goldenvoice Production Manager Dean Cohen to the technology and he quickly suggested that ODESZA might be a good potential candidate, so we reached out to Clearwing Productions, who was carrying a K1/K2 system with the artists, to see if they would have an interest.”

“We invited Patrick to our headquarters in Westlake Village to hear the system and create a live mix in the studio with L-ISA Labs Engineer Carlos Mosquera,” Brooks continued. “Patrick called ODESZA’s Clayton Knight from the studio to describe the immersive mix he was getting, and Clayton was interested enough that he came to Westlake later that week. Clayton was immediately onboard with the technology and what it could bring to their performance, ultimately taking the idea back to Harrison Mills—the other half of the duo—and the rest of the team, who came back saying ‘let’s go.’”

“Hearing our music played back in the L-ISA studio, it was immediately apparent that the system had a natural and multi-dimensional feel,” Knight described. “I knew right away that we had to try it on our tour. We’re always pushing to produce the best experience for our fans, and this technology lets us deliver our show the way it was intended to be heard. The show in Santa Barbara was incredible and we were proud to be part of L-ISA’s launch here in North America.”

Instead of flying the traditional left/right main arrays, the L-ISA deployment for the Santa Barbara Bowl show used a frontal system comprising seven arrays: 3 hangs of 8 K2 in the center flanked by 2 hangs of 12 Kara as the “scene” system, and 2 outer arrays of 8 Kara as the “extension” system. Behind the center K2 arrays were 2 sub arrays, each featuring 6 KS28 with the bottom enclosures rear-firing for cardioid mode. Seven Kara spread out across the stage lip and 2 ARCS II enclosures positioned on either side of the stage rounded out the fill system, and all enclosures were powered and processed via a combined total of 27 LA8 and LA12X amplified controllers in conjunction with the L-ISA Processor.

“The biggest takeaway I have from this show was the imaging—no matter where you were in the venue, it was absolutely perfect,” explained Clearwing Productions Director of Operations Bryan Baumgardner. “Nearly every single seat in the Santa Barbara Bowl was able to hear the complete mix with no artifacts, which was absolutely mind-blowing. Everything was exactly the same everywhere for most of the audience, which is totally unheard of. And given L-ISA’s elegant scalability, I foresee this being great for different sized venues in the future.”

“It was amazing to partner with L-Acoustics on North America’s first L-ISA experience,” Baumgardner concluded. “The way that L-Acoustics handled the whole process was remarkable. It wasn’t simply, ‘Here, go do it.’ It was, ‘Here, and we’ll help you with every step of the process,’ which created an unforgettable experience for the fans, the artist and everyone involved.”