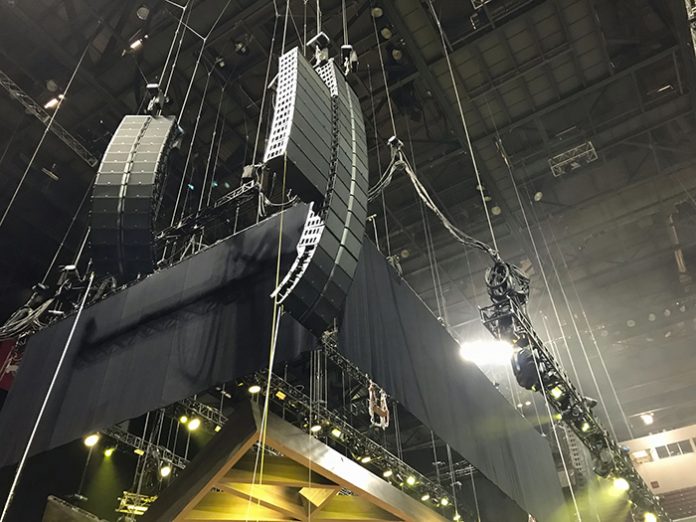 Tasked with bringing Lana Del Rey’s LA to the Moon tour to audiences in hockey arenas and other acoustically challenging venues, FOH Kevin Madigan made use of a DiGiCo SD5-driven L-Acoustics’ K1 system.

“We’re not trying to get huge SPLs—quality is the key, and that was taken into account with the PA choice and system design,” Madigan noted. “It really is a show that’s very vocal-based. It’s all about the songs and her voice. So, keeping that in mind, I initially met with L-Acoustics’ Dave Brooks [Application Engineer, Touring Liaison] and we came up with a system design that allowed us to maintain the feel of intimacy in a large arena show. The coverage and the quality of the system make that possible and the linear reproduction of sound everywhere really helps people to feel as if they’re quite close up. The idea that, sonically, no one ever feels far away from the stage. To achieve that, we take a lot of care and spend a good deal of time every day listening and measuring so that the sound is consistent all the way to the highest seats in the arena.”

Brooks’ design proved successful not just in the room but on the stage as well. “In addition to the L-Acoustics system delivering the best possible audio product in the audience area, it’s provided a remarkable level of consistency on stage,” Madigan continued. “Some things, such as sub timing and alignment, may change a bit from day to day, but we tend not to deviate from Dave’s and my initial design. It’s really our master blueprint for what we do every day.”

“We’re using K1 for the main hangs, with K2 for down-fills and out-fills, and there are some K1-SB in there as well,” Madigan said. “The day-to-day system consists of 14 K1 over 4 K2 as the main L/R, with 8 K1-SB flown outside of the main hangs. In addition, 18 SB28 subs are ground-stacked in groups of 3 across the stage in a cardioid configuration. I know that sounds like a really large number of subs for a show with this kind of intimate, vocal-based music, but while the flown K1-SB allow us to get really even sub coverage thorough a large arena, the main use is actually about cancellation of sound on the stage itself.”

Flying the l-acoustics K1-SB alongside the main L-Acoustics K1 hangs created a cancellation node on the stage that went up to about 200Hz. “So the LF intensity on the stage is much, much less, which makes things so much more comfortable for the artist,” Madigan continued. “Whether you’re standing in the highest reaches of the arena or on the stage, you’re hearing different aspects of what the K1-SB are doing. Turning them on and off makes a marked difference in overall sound consistency in the room and results in a large drop in sound energy on the stage. It’s really the best of all possible worlds.”

That cancellation is a big deal for an artist who Madigan said is “really striving to do her best every night, and this allows her to hear her best. It’s been remarkably successful.”

The pace of the tour – nearly 2 dozen dates in 6 weeks – can take a toll on a singer, and both artist and crew have been very happy with the system and its design. Madigan concluded: “We count on L-Acoustics because, at the end of the day, it’s all music and the common factor is usually that vocal. L-Acoustics systems in general, and this design specifically, have been a major factor in the success of getting that vocal out there and representing it well on each and every show.”