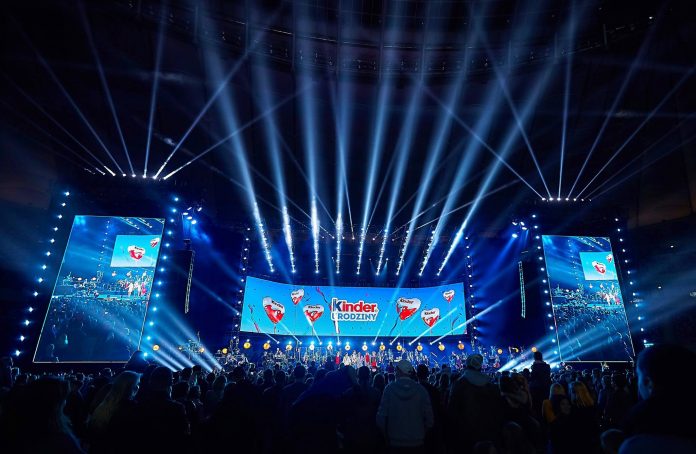 On 14 October 2018 Kinder celebrated its 50th anniversary in style.

TSE Grupa was responsible for technical services at this huge show, which included everything from stage construction to ambitious multimedia, lighting, and sound production.

TSE Grupa, founded by Łukasz Kubiak and Piotr Basek, is not new to large, complex events, with a portfolio that includes International Children’s Song and Dance Festival in Konin, and the NATO Summit in Warsaw.

According to Basek, TSE was chosen for the Kinder anniversary concert because of an excellent existing relationship with the event’s agency, Generations, and another recent anniversary event at the Municipal Stadium in Poznań for car manufacturer Volkswagen. Koncert Pełen Marzeń though was a much bigger undertaking.

“Initially, we planned a smaller system,” explained Basek, “But after modelling the stadium and the sound design in L-Acoustics Soundvision software and talking to the sound team, because of the sheer scale of the event, we decided we needed more power and, consequently, more speakers.”

TSE worked closely with the Polish equipment supplier and L-Acoustics Certified Provider Distributor, Audio Plus, to get the additional hardware together. “Audio Plus, and in particular the manager of its concert sound department, Wojtek Mazurek, helped us a lot,” said Basek.

“We would not have been able to handle this event using only our own resources. I think Wojtek shipped us every single L-Acoustics speaker available on the Polish market!”

The Koncert Pełen Marzeń system consisted of two hangs of 12 K2 for the main PA, supported by 16 ground-stacked SB28 subwoofers, eight either side of the stage in an end-fire configuration.

For front fill, four ARCS Wide were used, and a dozen X12 coaxial enclosures were deployed as monitors. The delays used 117 Kara and 24 Kiva II, and all loudspeakers were powered by LA4X, LA8, and LA12X amplified controllers.

“The whole thing was designed in the L-Acoustics Soundvision application,” said Mazurek. “Piotr Basek is big fan of Soundvision as it also helps budget the event – something that directly affects the relationship with the client, and the financial success of the show. The design, implementation, and tuning of such a large system was made possible by excellent customer training, and because L-Acoustics has such a homogeneous, complementary range of technologies.”

“The key feature of the L-Acoustics brand is flexibility,” said Basek. “Every component is standard, anywhere in the world, and they operate on one stable network via LA Network Manager. Everything is configured from one computer, so one person has control over the entire audio system, even in such a large facility as the National Stadium; that’s not easy. I have a lot of respect for the National Stadium, but people understate its size; if you leave something in the car, be ready for a fifteen-minute walk. Thankfully this was not the case at the Kinder event. In fact, we packed the sound for the whole stadium, and the whole Kinder anniversary concert, in one optical fibre network. And it worked perfectly!”