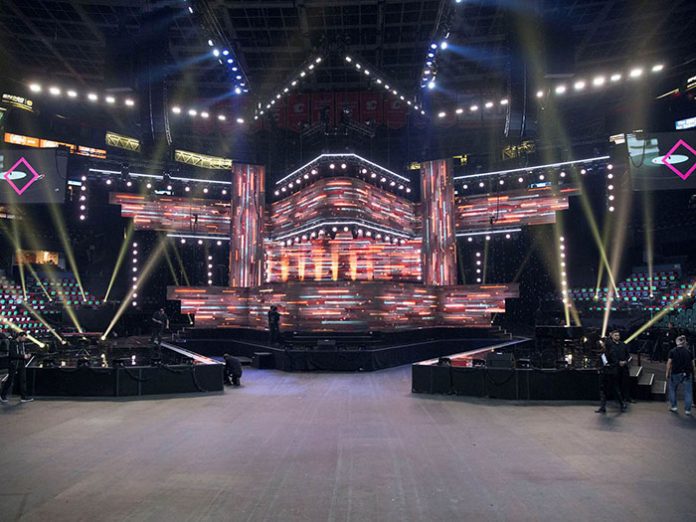 But it was the performance by an L-Acoustics K1/K2 sound system—provided by another Canadian original, Solotech—that seamlessly kept the music sonically clear all night long.

Solotech’s L-Acoustics system proved to be a particularly ideal solution for Scotiabank Saddledome, which is a beautiful sounding hall with a unique hyperbolic paraboloid-shaped roof (the world’s longest) offering fantastic interior sightlines. However, that same design poses a number of challenges in terms of weight limitations. Thankfully, the superior weight-to-power ratio of L-Acoustics’ K2 allowed the JUNOs to enjoy powerful system performance without concern for any weight-loading issues.

“The K2 provides lots of power for its weight, so it was the perfect choice for this show, and perhaps the only real choice,” observes Solotech Project Manager Patrice Lavoie. “Because of its light weight we were able to design a system optimized for the venue and show’s particular setup without having to focus on structural limitations.”

The system that Solotech designed and flew at Scotiabank Saddledome more than sufficiently accommodated the show’s wide range of musical performances—from rock, pop and electronic to country, folk and classical. The main PA consisted of four K1 enclosures over 14 K2 per side, with low frequencies extended by eight K1-SB subs flown to the outside of each K1/K2 hang plus six total SB28 ground-stacked below. Out-fills were comprised of 16 K2 per side, while two more arrays of six K2 were flown out in the house for delay.

To cover the challenging V-shaped audience space in front of the stage, where enthusiastic crowds stood to keep the energy up for the cameras, four ARCS Focus enclosures made up a center cluster: two firing downward toward the base of the V with a single cabinet addressing each side section. On stage, monitor duties were fulfilled by ten 12XT coaxial speakers powered by three LA4X amplified controllers. Aside from the stage wedges, the entire system was powered using 56 LA8 amplified controllers.

Considering the range of music genres represented at the show, Lavoie said that many system designers would raise an eyebrow at the fact that only six floor-stacked SB28 subs were deployed. That, he noted, is testament to both the SB28’s power and K2’s full-range speaker design.

“The amount of sound and low-frequency response that we achieved using only six subs on the floor was amazing,” he said. “And K2, of course, gave us excellent coverage, with a tight pattern that was able to deliver sound exactly where it was needed, in a venue with considerable weight-loading restrictions. The show had a lot of great sound from a system smaller and lighter than you would have expected. It wouldn’t have been the same without K2.”

Mark Vreeken, FOH Engineer the JUNO Awards event, said that the K2 performed brilliantly, and any apprehension he might have had with the shift from K1 was quickly dispelled. “I was very impressed with what we got out of the system,” he said. “I thought there might have been a compromise going with K2 instead of K1, but I wasn’t missing anything tonally. We had to use a smaller quantity of subs because of weight restrictions, but the rig still sounded huge when it had to. It was easy to get each mix together quickly and I thought every band translated really well. We got great reviews from all the artists and I hope we use it next year!”