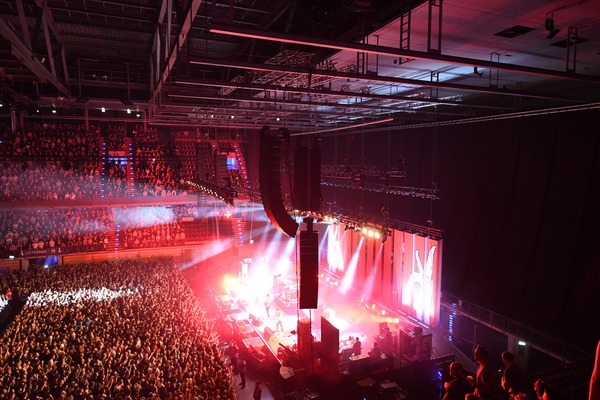 The 5-piece outfit is a long-term client of the Berlin-based service provider, having embarked on their first tour of duty with MLA back in 2012. This time around, the band played mostly arena sized venues ranging between 8,000-14,000 capacity, with additional club gigs (through house systems).

The standard PA set-up comprised 13 MLA and a single MLD Downfill per side, with either three and four MLX subs flown next to the main hang to add further sub bass to the bleachers and to support the flown outhangs comprising 12 MLA Compact. A further 12 MLX along the stage apron, stacked in pairs, were designed as a broadside array.

Joint system technicians Benny Franke and Thomas Birnbaum assisted Complete Audio MD, André Rauhut: “With flown subs that powerful, they had to pay a lot of attention to time-aligning the MLX properly in order to blend in well with the rest of the system.”

While Franke was taking care of the pre-production and MLA set-up, Nico Lindner took his place in the FOH mix position. It was the latter’s first tour with flown subs and he was more than happy with the outcome. “With this setup, you can easily achieve the same sound in the bleachers, compared with just having subs on the ground.”

At around the same time Complete Audio also had an arena sized MLA system out with German/American rapper Casper on his Lang Lebe Der Tod (Long Live Death) tour. While the PA design boasted a similar set-up (again with 26 x MLA) Complete Audio decided not to fly subs, as André Rauhut explained. “This was mainly because Casper has more sub signal below 50Hz in the main mix. In view of that, they had way better control with a sub arc in front of the stage only.” This arc comprised 20 MLX — 3 high on the outside and stacked 2 high along the stage, while 24 MLA Compact were deployed as side-hangs.