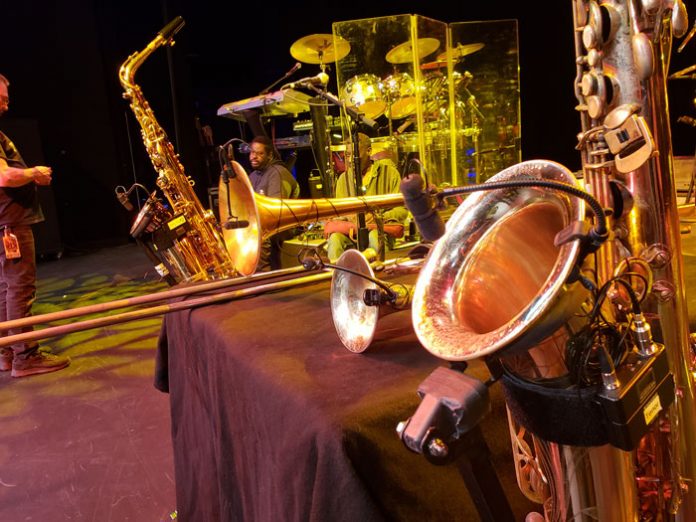 When Ed Irons came onto the scene as Kool & The Gang’s Production Manager/FOH Engineer, he was excited to finally get his hands on DPA Microphones’ solution after hearing colleagues rave about their high-quality performance. With DPA’s 4099 Instrument, 2011 Twin Diaphragm Cardioid, 4011 Cardioid and renowned d:facto 4018 Vocal Mic, Irons can deliver Kool & The Gang’s signature sound to live audiences around the world.

Comparing previous microphones to DPA, Irons and the award-winning musical group were quick to notice the difference. “Once we heard the DPA mics, we were hooked,” he said. “The horn section for Kool & The Gang is a franchise sound. With the 4099s, it is so easy to dial in on the fullness of the group. Most notable is the ease with which I capture the true character of each instrument; whether it’s a sax, trumpet or trombone – they all sound awesome with DPA.” Kool & The Gang utilises three 4099 Loud Instrument Mics and one 4099 Extreme on their horns section, along with two 4011s for mic-ing the percussion rig.

Most recently, they began using the 4099 Instrument mic on bass. “Although the 4099s sound great on all of the band’s instruments, we were especially blown away when we used them on the bass cabinet – as it’s typically quite difficult to capture clear sound in this application,” added Irons. “The ability to deliver truth across the full low-end spectrum is amazing.” For Irons, authenticity is the standout feature of their collection of DPA microphones. “Whether mic-ing a trumpet, alto or tenor sax, trombone or even bass guitar, I am able to deliver exactly what is coming from the stage to audiences large and small – all while EQing less,” he explained.

Additionally, Jack McDonald, monitor engineer for Kool & The Gang, appreciates the pristine DPA sound when feeding audio to the band’s in-ear monitors. “The microphones do the work of delivering what they are being fed, and I simply pass it on directly to the band, without colouring,” he said. “Every member of Kool & The Gang is on in-ear monitors, so their capacity to hear exactly what they are doing is a huge benefit; we thank our DPAs for that.”

Another standout feature for Irons is the durability of DPA mics while out on the road. The band puts on around 100 shows annually, with 65% of them in the international market, which means, they require mic solutions that can take a beating. “These mics work every night, without fail, delivering true, crystal-clear sound,” said Irons. “When we pull out the DPA line, we know they are going to deliver – they have been thoroughly road-tested, for sure. That classic DPA sound has now been around the world with us at least twice – from exotic destinations, including Richard Branson’s private island, to huge festivals across Europe and Asia, such as Woodstock der Blasmuzik this past summer. In a chaos filled environment, DPA rocks!”

Additionally, McDonald is appreciative of the support the pair has received from the DPA team on his time working with Kool & The Gang. “I cannot say enough about the customer support and service we have received,” he added. “Whatever we have needed along the way, from initial contact to product delivery and support, DPA has stepped up and provided; they’re an awesome team!”