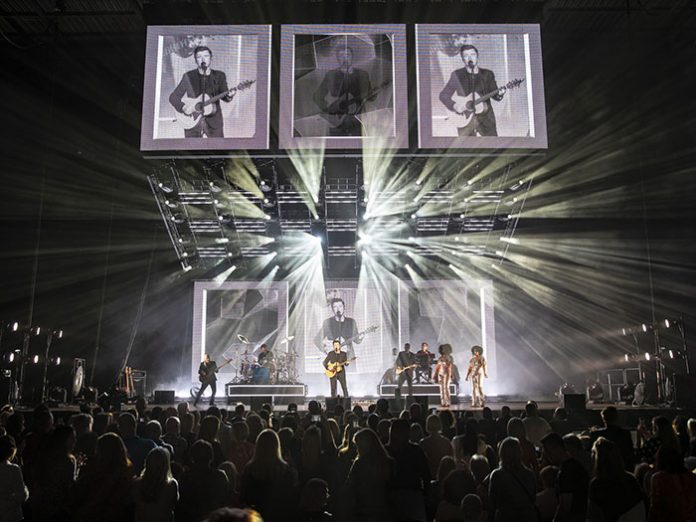 Kinesys has taken a look at a few of the acts that were on tour this autumn using the company’s automation kit to accomplish a diversity of creative tasks.

“I wanted a bit of additional craziness going on behind the band,” stated The Prodigy Lighting and Set Designer Tim Fawkes … which is why he is utilising eight Kinesys Elevation motors to move four special 4m long lighting trusses up and down, just upstage of the band, for the current European leg of their No Tourists tour.

The new album blasted its way to the top of the charts as the arena tour kicked off in the UK, and The Prodigy wowed their ecstatic warriors and fighters with the usual array of visual and sonic anarchy that’s made them one of the most exciting live bands of the last three decades! Every bit as energy fuelled now as in the 1990s!

The four pods in their home position made up two apex shapes to blend in with the rest of the structural trussing design. Each one is lined with four Martin Sceptron LED battens, five GLP JDC1 strobes, four Robe MegaPointe moving lights, four Showtec Sunstrips and five  PAR cans with CP60 bulbs for a classic ‘ACL’ look.

All lighting and rigging equipment is being supplied by Blackburn based rental company HSL. Having these pods automated on the Kinesys motors using a Vector controller enabled Fawkes to add lots of extra dynamics to the mayhem.

Astley launched his new Beautiful Life album to great enthusiasm, but his many fans from all generations also wanted to hear his 1980s dance stompers like Together Forever and Never Gonna Give You Up.

Hurst’s design featured two identical large LED screens, one upstage and the other downstage. The downstage one moved up and down on four Kinesys points controlled by Kinesys’ flexible and straightforward Vector software.

It started in the down position as Astley made a dramatic stage entrance silhouetted against the LED screen, and as the first song gained momentum, the screen raised smoothly and seamlessly to reveal the stage, set and band behind.

In the up position, this front screen formed part of the overall architecture defining the geometry of the stage design.

The screen moved twice also coming in at the end of the last number of the set, with Astley and all the band silhouetted in front of it as they stepped forward and exited stage left.

This summer and early autumn saw The Chemical Brothers on the road completing a hectic festival schedule followed by a week of high-profile headline shows, complete with another fantastic visual experience created by show designers Adam Smith and Marcus Lyall (@smithandlyall).

This blended effervescence, excitement and new ideas with much loved vintage The Chemical Brothers visual gags like their large-scale dancing robots!

The fully integrated The Chemical Brothers lighting and video show featured a large LED screen upstage with five moving (trussing) pods behind it, each loaded with a Robe MegaPointe moving light and some LED battens – adding some more optical mystery to this vibrant equation.

These were automated on 10 x Kinesys motors being run on a K2 controller, supplied by rental specialists Lite Alternative together with all the tour’s lighting and rigging equipment.

The pods changed positions constantly throughout the set, so fans were aware of moving lightsources as they flew up and down, with lights blasting through the screen. However, being masked by the screen, it wasn’t immediately apparent where they were in relation to the stage, adding another layer of optical depth and texturing to this very multi-faceted picture.

The Chemical Brothers are well known for their interactive, eye-catching and entertaining visual shows, a perfect confluence of lighting and video which, with the band’s preference to remain in silhouette, is a significant element of all their live performances.