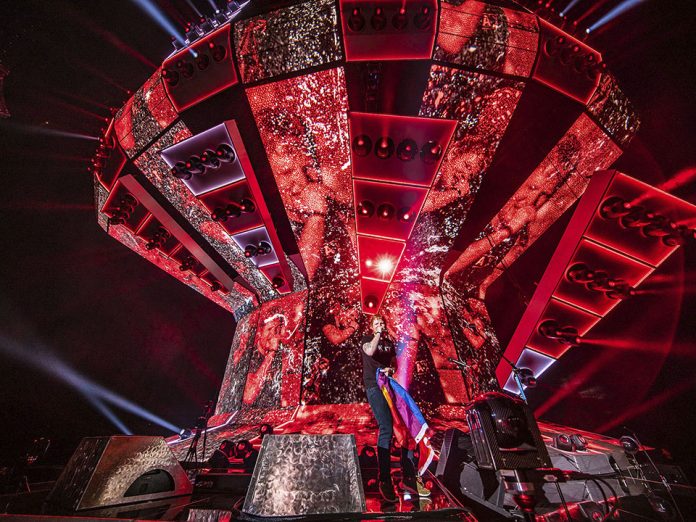 The phenomenal talent and success of UK singer songwriter Ed Sheeran continues with more great songs and hits and the start of a new world tour … for which a substantial Kinesys automation system was specified to assist with the daily stage set build and to facilitate the movement of lighting pods during the show.

Mark Cunniffe has created the impressive lighting and scenography design, which is helping Sheeran wow the crowds and impress the critics.

The Kinesys system and control was recommended by Mike Oates, director of UK based Lights Control Rigging (LCR), the tour’s lighting equipment and crew supplier in combination with SES in the U.S.

It has been purchased by audio, rigging, motors and automation supplier, Salisbury based Major Tom Ltd., and is being co-ordinated on the road by Steve Bliss and operated by Omar Franchi from the rigging crew.

Bliss ‘s first job of the day is assisting the other lighting crew in building the mother-grid, which weighs a hefty 11 tonnes before being loaded with any kit!

This is lifted using 30 x 2-tonne single-reeved chain motors each fitted with a 4.75T Kinesys LibraCELL for full monitoring and controlled via the Kinesys DigiHoist Plus intelligent hoist controllers.

The mother grid is pre-rigged with 47 of a total of 52 1 tonne chain motors (five are hung daily) which are each fitted with encoders for full positional control, and these are controlled by the 8 32A Kinesys DigiHoists.

These sub-hung hoists control lifting the lighting and video elements into place during the build.

That comprises five curved video screens (crowns); four lighting crowns which sit in between each video screen and five video screens dubbed ‘the ceiling’ which sit horizontally above the stage that have triangular lighting “pods” filling the gaps. Additionally there are five video screens making up a back wall and giving a continuous ‘flow’ of video surface from the top header, through the ‘ceiling’ and down the back finishing at stage level where the video angles back on to the stage.

The four lighting pods are flown on the 12 500kg vari-speed Kinesys Liftket motors, which move into a series of configurations during the show.

These Liftkets are rated with a 10:1 safety factor and are also fitted with LibraCELLs as they fly above the artist’s head during the show.

The margins for movement are very tight and a key reason that Kinesys was chosen was for its accuracy, reliability and stability.

Joining the 12 DigiHoist controllers in the custom motor control ’dolly’ onstage is a Kinesys Mentor E-Stop hub giving SIL3 e-stop protection over the entire system. There is also an Ethernet switch for the Kinesys network and a LibraPRO control unit to manage the Libra cells. The dolly is powered via a set of 300A Powerlock connectors.

By the time the grid is fully loaded with all the kit and cables for the show, it weighs 32 tonnes. When it is taken out to show height, all the sub-hung motors are simultaneously run out – involving 1.6 Km of chain – pulling an average of 260A per phase.

Sitting next to the dolly is a Kinesys PDES (power distribution and emergency stop) control rack containing two PDES units (active and backup) and one array dealing just with data to the Elevation 1+s.

Controlling all the movement is the custom Vector computer rack, containing two PCs – for full redundancy- running Kinesys’ Vector, with a KVM for easy switching between the two. Three active screens are utilised, one for Vector, one for the LibraCELL feedback and one receiving a feed from the FOH camera … so they can see the movement at all times during the show. A UPS is in place for back-up power if needed.

During the day, this rack is positioned upstage centre where Bliss and Franchi have a clear view of everything being built, and once everything is in the roof, settled and trimmed, it is moved to its show operation position stage right. Three E-Stops are located around the stage for safety.

The Vector system works from two showfiles – one for the build / de-rig and one for the show.

The set-up one, in conjunction with the motor encoders, helps guide everything into the right positions, which can then be tweaked from FOH. With the margins between the lighting and video trusses being mere centimetres, the encoders are essential.

The build show file also has more relaxed ‘soft limits’ to allow greater latitude with the motors than is needed during the show. It has all 64 sub-hung motors in it (the 52 LoadGuards and 12 Elevation 1+’s), and during the set-up, the LoadGuards are controlled by two 32-way handsets (split stage right and left), while the Liftkets are tweaked using a Rigger 16 remote handset.

Once the trusses are built and the screens and headers attached, they are flown into an approximate position, and the cue in the Vector showfile applied to locate to the exact show position.

Once everything is hung and located correctly, the eight DigiHoist controllers are switched off as none of these components move during the show

The Show showfile is then loaded which controls just cues controlling the 12 Liftkets which are programmed with stricter limits so the lighting pods – each weighing 850 kilos – cannot be dropped into the stage or flown in to the video screens!

The pods move into five different looks during the performance, with Franchi running the Vector controller.

Bliss has worked in concert touring for the last six years and before that worked in theatre and touring theatre and is employed directly by LCR on this project. Initially this was as a lighting systems tech … and as the prep got underway, he was asked to take care of the Kinesys elements.

Previously, he had not had a huge amount of Kinesys experience, so it’s been a big learning curve and also testament to the intuitively and logic of the Kinesys architecture and philosophy.

He comments that it was really great to have Kinesys’ director Dave Weatherhead present during production rehearsals at Fly by Nite’s rehearsal studio in the west Midlands to answer questions and offer advice and experience, and he has the backup of Kinesys’ renowned tech support which is available 24/7 on the phone if needed. During rehearsals, they received additional Kinesys programming assistance from Andy ‘Paris’ Hilton.

“The Kinesys products are fantastic.” stated Bliss, “They do exactly what is needed, and are very accurate and safe. With the DigiHoist controllers reading the encoders, faultfinding is quick and easily”.

Weatherhead commented, “It’s a fantastic reference for all our products to be on a tour of this profile, prominence and length, a big investment for Major Tom and a great endorsement from a production specialist like Mike Oates as to the advantages that Kinesys can bring to a complex show like this”. He also noted that, “Having spent some time with the production and crew I can wholeheartedly say that everyone I have met on the show is, without exception, totally professional. They also happen to be some of the nicest individuals I have met in the touring world”.