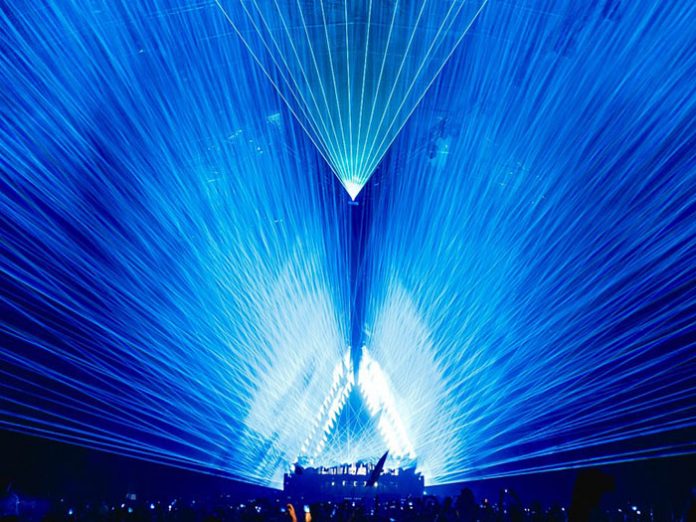 A regular collaborator on Hurst’s diverse projects, ER Productions has created a range of defining laser designs for the Swedish DJ superstars, which have been seen across the world including the duo’s headline set at Miami Ultra.

A consistent visual theme in all Axwell ^ Ingrosso shows is the iconic inverted ‘V’ logo, which was souped-up for the Steel Yard gig with 104 lasers converging to form the shape’s silhouette behind the DJs. To achieve this show stopping effect, ER Productions used its newly launched Kinekt laser system. As the name would suggest, Kinekt’s highly innovative system design enables any number of units to connect.

“Not to get too technical, but the collective laser beams meet on the X and Y axis to create upscaled array effects, far beyond anything that can be created by a standard moving head light. Kinekt comes with an in-built FB4 control and works with DMX, Beyond and Art-Net, making it extremely user friendly”, said ER Production’s Co-founder Ryan Hagan.

Another striking signature laser effect that has been used time and time again by Hurst in his work for Axwell ^ Ingrosso, is the apparent teleportation of the duo onto the stage. To create the effect at Steel Yard, nine BB3 lasers were rigged onto Kinesys motors and focused down onto the stage, with the beams appearing to draw the DJs into their opening positions.

With Axwell ^ Ingrosso closing the 3-day festival, ER Production’s skilled 4-person crew rigged a total of 138 lasers comprised of over 100 Kinekts, a Phaenon Pro 30000, Laserblades and the BB3’s on an overnight changeover. The experienced crew managed to deliver a visually impressive show that went without a hitch.

“The May bank holiday was a phenomenal first outing for Kinekt. Andy even used an additional 98 units on Sigma’s landmark live show at the Royal Albert Hall on the same weekend. We’ve put a lot of work into developing the system and couldn’t be happier with how it performed,” concluded Hagan.