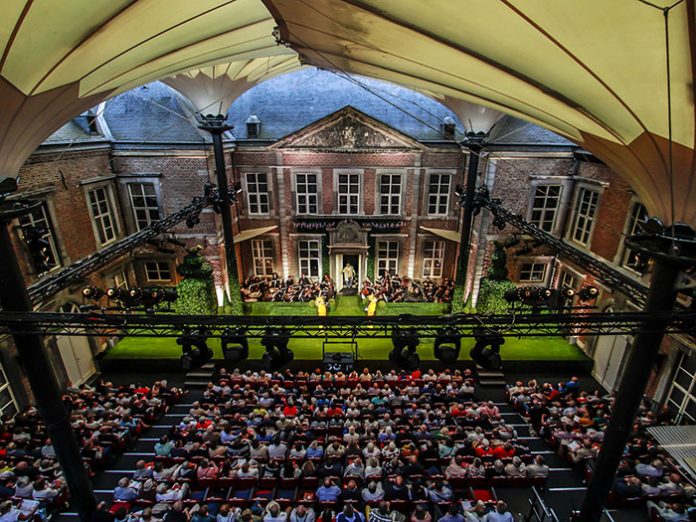 Painting with Light renewed its long-term working collaboration with the Summer Opera at Alden Biesen, a beautiful 16th century castle in the village of Rijkhoven, Limburg, eastern Belgium just a 20 minute drive from the creative design practice’s own HQ in Genk.

Paco Mispelters from Painting with Light was tasked with lighting this year’s production of Gaetano Donizetti’s well known comic opera “Don Pasquale”, celebrating 20 years since the start of the successful annual opera event.

In keeping with the lighthearted and animated rhythm of the piece, Mispelters wanted to keep the lighting upbeat and vibrant in style and feel.
The production is staged in the gardens of the castle – now a cultural and conference centre – and this well-tended, leafy green environmental setting provided the inspiration for Philippe Miesch’s set design, which extends the garden theme and comprises a number of high-quality scenic trees, plants, grass and other foliage.

Upstage is a 40 piece orchestra, with the action unfolding on the main stage space in front. While the performance area has some weather protection from a temporary roof structure, the ambience of the event is very much ‘outdoors’.

Mispelters started the creative process in detailed discussions with director Frank Van Laecke, who had some clear ideas, and central to the narrative was the timeframe of the piece, which is set over the course of sunny days, leading into evenings and nights.Lighting needed to help establish the chronology and also served to focus on precise physical areas and actions needing to be highlighted and separated from the rest of the stage.

The roof system is ground-supported by four large, structural pillars with hooks along the top, beneath which U-shaped trusses were rigged to provide lighting positions over the performance space.

Eight Vari-Lite VL2500 Spots are used for the main back lighting fixtures, and four VL3000 Spots – on the front truss – project gobos and texturing onto the front of the castle for some striking, but understated kinetic backdrop effects.
Eight Elation Satura LED profiles with framing shutters are the main tools utilised to clearly define a number of different zones on-stage, with eight Robe LEDWash 300s dotted around, subtly bathing the orchestra in light and generally adding to the atmosphere.
Six bars of 6 PARs in front and side positions provide general stage lighting and washing. It’s not a massive rig, so every fixture is worked hard and used in a properly multifunctional context.
The challenge was getting the range of appropriate looks for the performance, using an expedient amount of lights, explained Mispelters.
The three-act performance – run without any interval breaks – opens before sunset each evening, so there is plenty of ambient light bouncing around at this point. The stage lighting also has to provide a good balance in all these light levels, as dusk transitions into night and then darkness falls for the end of the show. It is also important to light performers’ faces and eradicate shadows during the daytime section of the show, a goal that can be achieved efficiently with this rig and design.
Mispelters programmed the show on a grandMA2 light console, which was then transferred to an onPC / Fader Wing setup for the 4 week run of shows.
“Less is more sometimes” commented Mispelters, reporting that everyone is very happy with the results. “Sometimes it’s good to stretch your imagination and really think about how kit can be used inventively and resourcefully”.

Painting with Light provided one of its Christie Pandora’s Box media servers to the production, which plays one piece of video towards the end that explains part of the story which happened earlier in secret. This is projected onto the castle via a Panasonic 7K machine rigged on the front truss.

The Summer Opera Festival is providing two lighting operators and the lighting equipment is supplied by rental company New Lines from Genk, which also has a long association with the popular annual event.